The run is done, but the lessons are forever

In a bid to be on Omaha's mayoral ballot this spring, Dawaune Hayes learned a lot about people, community, and more.

I’ve been thinking a lot about life since it happened.

I was running for mayor of Omaha. A place where I am from and a city I love very much.

What would motivate me to seek such an office in Omaha, Nebraska? 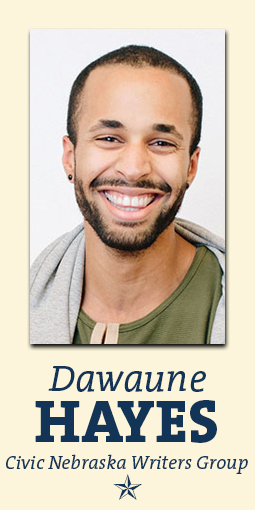 In the process of hearing and retelling people’s stories as a journalist, I found myself riddled with guilt, wishing I could do more. Then I would go to city hall and see how the topics they were discussing would be completely separate from how people actually live their lives. That or the decision made in city hall did not support the immediate needs of the people as they clearly dictated in public hearing testimonials and social media chatter.

Anyway, I had no intention of running for office. I was just tired of being mad all the time. In this process, I learned some valuable lessons I would like to share with you.

1. If you think someone should do something, that someone is probably you.

I used to find myself so frustrated by policies, procedures, and statements from public officials I would go on rants almost daily about how angry it made me. I would stress myself out, raise my heart rate, and just ruminate about how I wish someone would do something. After enough disappointment, I realized that I had the information, interest, and ability to make a difference, so I used them the best way I knew how. We have to be our own champions.

2. When you speak with passion and purpose, people listen.

People actually like hearing about the aspirations of others. When you engage people in meaningful discussion and talk like you genuinely care, they are usually receptive to your ideas and may even support you. I learned this by talking to hundreds of people over the course of the campaign. Right now, people are looking for real interactions that remind them that there is good in the world.

3. It does not have to cost millions to run an impactful campaign.

It is often said money determines who will win the race. To some degree, that makes sense. Materials, staff, and advertising have obvious costs that increase over time. I found, though, that thoughtful design, intentional language, and a supportive community can inform and engage people more deeply than any amount of money could ever do. It’s not always about quantity.

4. The most powerful person in Omaha is not the mayor.

This is a fact I’ve been aware of for a while but it was not until I ran for the office did I see how true it is. The people who make Omaha what it is has never been the mayor. Sure, the mayor and the mayor’s colleagues may dictate certain ordinances or culture in city hall. But when it comes to community, creativity, and communication? That all comes from The People.

We are more than just “taxpayers.” We are humans who cohabitate in this place we call home. Our presence, by definition, is what enables Omaha, Nebraska, as a municipality to exist. So if we are not here to grow families, share culture, and create meaning, then the city would cease to function. This means that We are the Leaders we seek and no election alone will determine our future for us.

To be honest, I am quite relieved to be done with campaigning this time around. It is time- and energy-consuming and is very challenging to your values and priorities. I learned a lot about myself and my community and will only continue pushing Omaha forward.

We are named after “The People Who Move Against the Current,” so let’s act like it.

An artist, journalist, and social entrepreneur, Dawaune Hayes campaigned for Omaha mayor in spring 2021. He brings people, ideas, and resources together for positive change. In 2018, he joined forces with The Omaha Star and 101.3 FM Mind & Soul Radio to develop NOISE.