The 52,541 ballots cast in the citywide election is a 35 percent jump in ballots from the previous high in a non-mayoral election. It also marks the second-highest total for any city election, behind 2019’s mayoral and council vote.

Lincolnites easily broke a record for ballots cast in a non-mayoral city election on May 4, showing once again that when voters have the opportunity to cast ballots securely, safely, and conveniently, they will turn out in larger numbers.

The 52,541 ballots cast in the citywide election – which settled three at-large City Council seats, a majority of the school board, and two seats on the Lincoln Airport Authority – is a 35 percent jump from 2017’s previous high (38,831). It also marks the second-highest total for any city election, behind 2019’s mayoral and council vote.

Early voting accounted for the surge. At least 33,604 Lincolnites cast their ballots before May 4, while the capital city continued to emerge from a year of COVID-19 limitations. The groundwork for larger participation in the general election was laid earlier in the spring; voters who requested a vote-by-mail ballot for the city’s April 6 primary also were given the option to request a vote-by-mail ballot for the May 4 general election. 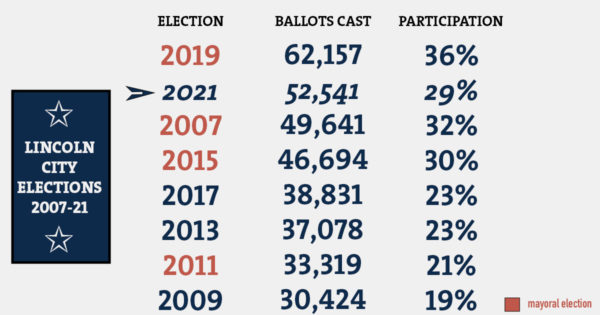 ACLU of Nebraska, along with Civic Nebraska and the Nebraska Civic Engagement Table, sent vote-by-mail ballot request forms to all registered Lincoln voters in March. Civic Nebraska and partners conducted nonpartisan get-out-the-vote efforts and events throughout the spring.

“The pandemic has changed many aspects of everyday life, but perhaps a silver lining is that Nebraskans have seen firsthand just how easy, reliable, and secure it is to vote by mail,” said John Cartier, Civic Nebraska’s director of voting rights. “And more people voting means a more representative democracy, whether that’s a result of national, statewide, or local elections.”

Civic Nebraska deployed several Election Protectors to polling sites in Lincoln, who reported few concerns amid the generally light in-person voting. Accessibility concerns were noted at one north-central polling site, with parking spaces closer to the building’s entrance blocked by a large vehicle and forcing voters to park and walk farther than usual.

“Lancaster County has dedicated and efficient poll workers, election staff, and election systems,” he said. “Frankly, we weren’t surprised that our phones were relatively quiet on Tuesday and that our observers reported no serious issues.”

Civic Nebraska’s focus now turns to Omaha’s city election, which is May 11. Omahans will vote to elect a mayor as well as all seven seats on the Omaha City Council. Early in-person voting has begun in Omaha and will continue until Monday, May 10. Civic Nebraska will host nonpartisan get-out-the-vote phone banking at 6 p.m. May 6 at Culxr House, 3024 N. 24th St. Contact Heather Engdahl for details, and learn more about Omaha’s city election at our Election 2021 Central hub.