Your focus becomes your priority

Ronda Graff asks: What if communities were intentional about their focus and zoomed in on the positive rather than the negative?

Ask any bicyclist, whether an avid cyclist or a casual biker, what they think when they see a rock on the road in front of them, where one of two things will likely happen. 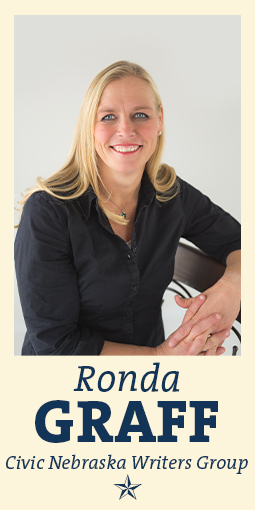 If they focus on the rock, the front tire will almost always hit it, despite the ability to swerve around the obstacle. Their focus –that rock – has become their priority and will consume their thoughts until they reach it.

At a minimum, the tire will send the rock flying but it’s also possible that the ride just came to an end because the tire popped, or even worse, the rider was in an accident.

The other option is to take their eyes off the rock. Instead, they focus on the smooth road that lies ahead, the gentle breeze flowing over their handlebars, and the opportunity to enjoy a beautiful day on their bike as they pedal past the untouched rock.

One negative thing in front of you – even just a small rock – can consume your thoughts and consequently affect your entire day, even derailing your plans. That negative thought becomes your priority.

The same can hold true as we work to develop our priorities within our own communities.

Negativity can consume your thoughts. It can morph your plans. It can shape your thinking. It can affect your relationships. It is easy to get derailed by it.

Perhaps it is a political leader who always says no rather than how do we make this work. Maybe it is a project that has a lot of potential but is weighed down from mistakes made in the past. Maybe it is a group whose favorite phrase is “we’ve already tried that and it didn’t work,” yet they won’t consider any new ideas.

But what if you were intentional about your focus and focused on the positive rather than the negative? After all, your focus becomes your priority.

Perhaps your community is considering a multimillion-dollar project, such as a new pool, and the pool committee has researched dozens of pool projects across the state. Instead of highlighting the one pool project that didn’t go as smoothly as planned, the focus should be on all the other pool projects which did come together financially and logistically. The one that brought everyone together, that made community members proud.

If you focus on the positive or on the possibilities, then your focus becomes your priority and your priorities get done.
While some may argue (especially anyone with multiple children), your mind truly cannot multitask. We are not built to focus on more than one thing at a time. So if it is filled with negative thoughts, then that is what will happen.

And if the focus is to become a progressive, forward-thinking community, then it will become a priority. And that priority will hopefully become a reality.

Ronda Graff is a native of Omaha who has lived 25 years in McCook and Southwest Nebraska. She cherishes her role as mother to seven children and coordinator for the McCook Community Foundation Fund.