The 414,869 ballots make 2022 our largest-ever gubernatorial primary election, with just less than half being cast early.

On June 6, the Nebraska Board of State Canvassers certified the 2022 Nebraska Primary. That makes it official – the 414,869 ballots cast made this year our largest-ever gubernatorial primary election. The former champ was 2006’s primary, which featured a GOP race between Gov. Dave Heineman and former U.S. Rep. Tom Osborne. Like that year, 2022’s highly competitive GOP race for governor likely helped drive up participation. Unlike that year, a significant number of Nebraska voters banked their votes early. 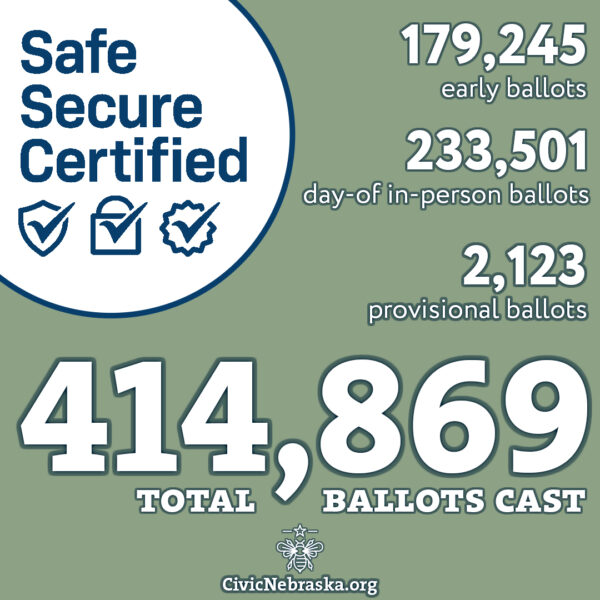 ›› Early voters cast 179,245 ballots. That’s about 43 percent of the primary electorate. We’re pleased to see so many Nebraskans have stuck with early voting, even with lower COVID concerns than two years ago. The safety, security, and convenience of voting early – mostly by mail – clearly made an impression on a sizeable number of our state’s voters; so much so that it’s become the new standard for hundreds of thousands of Nebraskans.

›› Day-of, in-person voters cast 233,501 ballots. Also, there were 2,123 provisional ballots cast. A provisional ballot is often known as “the ballot of last resort” and is used to record a vote when there are questions about a given voter’s eligibility that must be resolved before the vote can count. We’ll need to look into this number further, but on May 10 our nonpartisan election observers noted seeing several in-person day-of voters turn to provisional ballots because they had already requested early mail-in ballots, changed their minds, and decided to vote in person on Primary Election Day.

›› While it’s the largest gubernatorial primary in Nebraska history, 2022 fell short of the all-time largest primary. That came in 2020, two months into the pandemic, when 75 percent of voters reached for early mail-in ballots. That May, a record-smashing 492,580 ballots were tallied.

›› Nebraska had 1,237,438 registered voters as of May 10, meaning turnout was roughly 34 percent. While two out of three Nebraska voters deciding to pass on voting in the primary is not something to cheer about, that is up significantly from the last gubernatorial primary four years ago – and, notably, eight years ago, the last time an incumbent governor was not on the ballot. Neither of those primaries cracked 30 percent participation.

On to the general election on Nov. 8 – with a short stop on June 28 for the Congressional District 1 special election to fill the district’s vacant U.S. House seat. Check our Key Election Dates page at our 2022 Election Central hub for more details on registering and making a plan to vote.