If October’s returns are any indication, vote-by-mail has become a permanent standard for a sizeable portion of the Nebraska electorate.

As of Nov. 1, the state’s voters had requested 273,792 early mail-in ballots – and had already returned 153,035 of them. We expect to see the two numbers close rapidly by this year’s final submission deadline (8 pm CDT on Nov. 8) to reach an all-time high for early participation in a Nebraska midterm. This is good for democracy; more people participating in our elections makes our systems and institutions more representative than when fewer people take part.

The current high-water mark for early voting in a Nebraska midterm was set four years ago, with 208,945 of the state’s total 706,652 midterm ballots (29 percent) cast before Election Day. Those 2018 totals include both in-person early voting and early voting by mail. We’ll see soon enough, but nearly half of Nebraskans chose to cast their ballots before Primary Election Day in May; if the early vote makes up as much of the general election ballots as in May, that would mean anywhere from 610,000 to 650,000 ballots cast (note: This is our quick estimate. We should have an official projection on participation from our friends at the Secretary of State’s Office before Election Day). 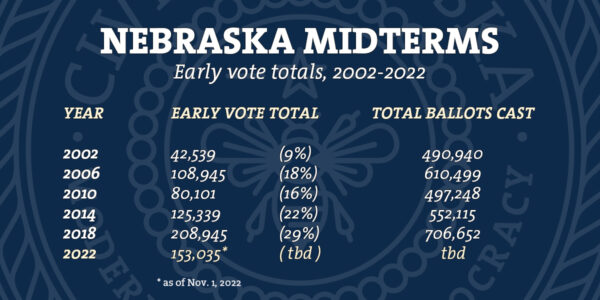 Record or no, this continues a steady trend in our state toward vote-by-mail, powered in part by the 2020 pandemic and the ease of voting by mail. It’s also despite a concerted effort by bad actors to spread untruths about the practice, suggesting it is somehow unsafe or, worse, “fraudulent.” Nebraskans of all backgrounds and opinions have largely seen through these bad-faith arguments and aren’t waiting to cast their ballots: As of Nov. 1, the party breakdown for returned ballots is Republicans, 46.4 percent; Democrats, 39.2 percent; and Nonpartisans, 14.4 percent.

Of course, it helps that Nebraska is a “no excuses” state, which means any registered voter can request an early mail-in ballot for any reason. And there are currently 11 rural counties (Boone, Cedar, Cherry, Clay, Knox, Morrill, Dixon, Dawes, Garden, Merrick, and Stanton) that conduct all-vote-by-mail elections, every time out. Those 11 counties consistently outperform the rest of the state, which is another reason why vote-by-mail is awesome – it drives much higher turnout and engagement.

For our part, we encourage early voting because it provides voters more time to research candidates and issues on the ballot, and it helps avoid Election Day curveballs – illness, lack of transportation, work or family emergencies, what have you. With early vote-by-mail, you can bank your vote, track it to be sure it’s been accepted, and then rest easy on Nov. 8.

Is your early ballot still on your kitchen counter or home office desk? With just a few days before Nov. 8, we strongly recommend you fill it out this week and drop it off at your county’s election commission office or at any of your county’s official ballot dropboxes. Here’s a map of every dropbox in the state.

Be sure to make your plan to vote, whether early or on Election Day. And if you have questions about this general election, visit our Election 2022 Central hub.

Let’s go get that record, Nebraska!

PrevPreviousRising Stars recap: the enduring power of CLCs
Next‘War must never stop you from doing what you love’Next

More than 90 percent of Americans say they want to volunteer, yet only one out of four actually do. It’s time to tackle that disparity, Tammy Day writes.