Census 2020 is over. Here’s how Nebraska added up.

Nebraska outpaced the national average, surpassed 2010's effort, and finished fourth among U.S. states and territories in self-responding to the 2020 U.S. Census.

With a U.S. Supreme Court ruling and a U.S. Census Bureau decision making Oct. 15 the final day for the 2020 U.S. Census, we now know what work awaits the Census Bureau between now and the end of the year to have as accurate and complete a national count as possible.

As you may recall, Civic Nebraska, along with the Nebraska Civic Engagement Table and the Nonprofit Association of the Midlands, formed and led a statewide coalition called Nebraska Counts to ensure as complete and accurate a census count as possible this year. Civic Nebraska got involved because it’s vitally important to our state on a host of issues, including political representation. Everything from Nebraska’s presence in Washington to the drawing of political boundaries within Nebraska to the allocation of billions in federal infrastructure funds to our towns and cities relies upon an accurate count of everyone living within our borders in 2020.

With the court’s ruling, we now have an opportunity to examine the final tallies for the Cornhusker State.

Not bad, Huskers. Not bad. 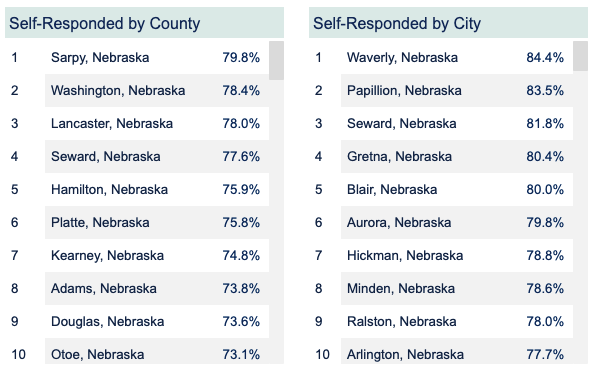 Efforts this spring to encourage Nebraskans to “self-respond” – complete the census online – paid off. For much of the year, Nebraska hung around the Top 5 of U.S. states and territories. As of Oct. 15, our final self-response rate was 71.9 percent, which is an improvement for the first time since at least the 2000 census. Coupled with follow-up enumeration by the Census Bureau, Nebraska’s overall enumeration rate is 99.9 percent.

Nebraska’s self-response rate also outpaced the U.S. average (66.8 percent), which was good enough for fourth-best nationally. Only our friends in Minnesota (75 percent), Washington state (72.2) and Wisconsin (72.1 percent) did a better job counting themselves than Nebraskans did.

Why was self-reporting so important in 2020?

Simply put, because it leads to the most accurate data. The Supreme Court ruled in favor of a mandate to submit the census counts to the president by the end of December – instead of by April 2021, as was originally hoped.

That means the usual processing on the part of the U.S. Census Bureau, which would usually take about five months, now must happen in about 10 weeks or so. Less time means more hurried work, particularly in checking the quality of the data, and more hurried work means the possibility of more errors.

What final impact this will have remains to be seen. Especially unclear is how accurately historically harder-to-count populations – including communities of color, immigrants, renters, and so on – will be counted when everything is finalized.

States, counties, and cities that had high self-response rates, however, stand a greater chance to be counted more accurately. That’s why Nebraska Counts put such heavy emphasis on completing the census online this spring and summer. And Nebraskans responded: Nearly 60 percent of our state’s self-responses came via the internet (you could also self-respond over the phone or via a paper form).

Nebraska Counts was truly a statewide effort, with dozens of local organizations picking up the torch and spreading the Get Counted message throughout their communities throughout 2020. Thank you to everyone who activated, advocated, and promoted on behalf of a complete count of Cornhuskers this year. Nebraska counts!