Our representative democracy cannot survive without the active and informed participation of its citizens. The data suggest younger people, racial and ethnic minorities, lower levels of income and education tend to be underrepresented in the political process.

The survey questions selected from the current population survey (CPS) show Nebraska in the middle of the pack, rather than a leader, of state rankings in several indicators of political involvement.

Political involvement includes direct action in the political process such as voting and contacting public officials, and also actions of political discourse like consuming news and discussing politics. 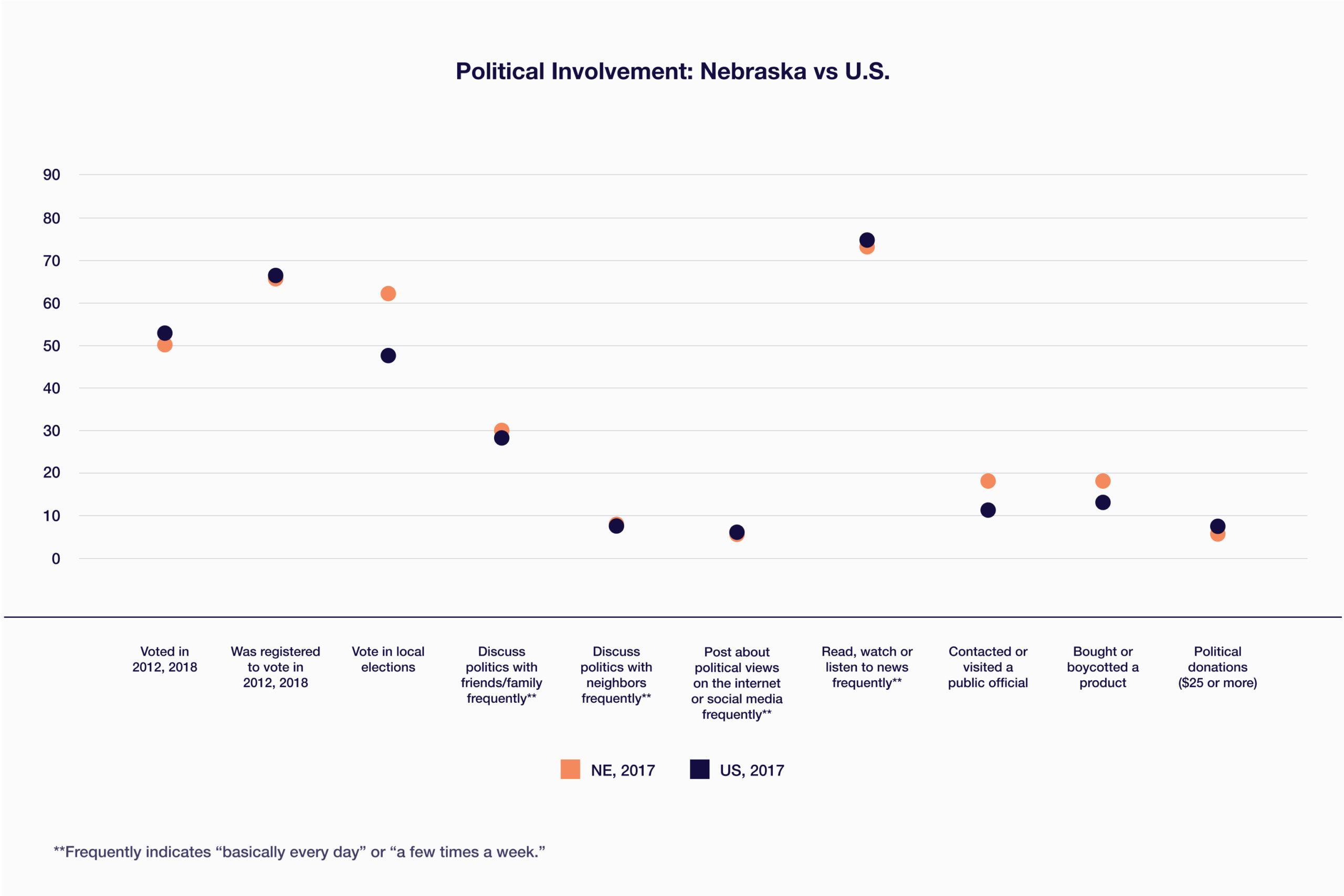 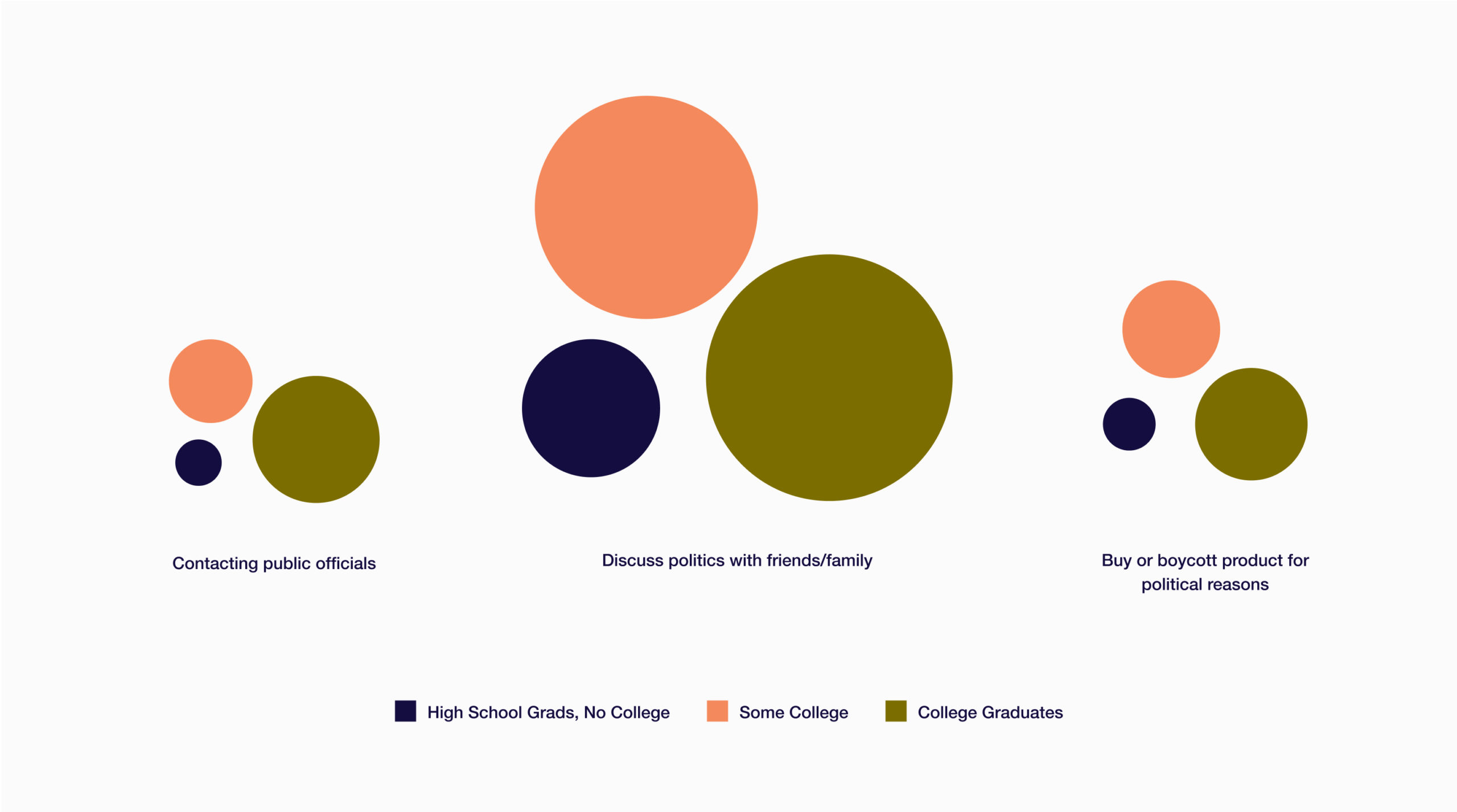 It’s worth mentioning that while Nebraska’s “rank” in voting rate relative to other states improved from 2012 to 2018, the percentage of Nebraskans who voted was estimated to be lower in 2018. This could be attributed to the fact that 2012 was a Presidential election year, which often motivates a larger turnout, and 2018 was a midterm election.

UNO’s Center for Public Affairs Research analyzed the Secretary of State’s data for 2018 voting and registration. The image above shows the geographical distribution of voter turnout in 2018, black colored counties being less that 45% turnout (12 counties) and deep red being 60% or more (14 counties). 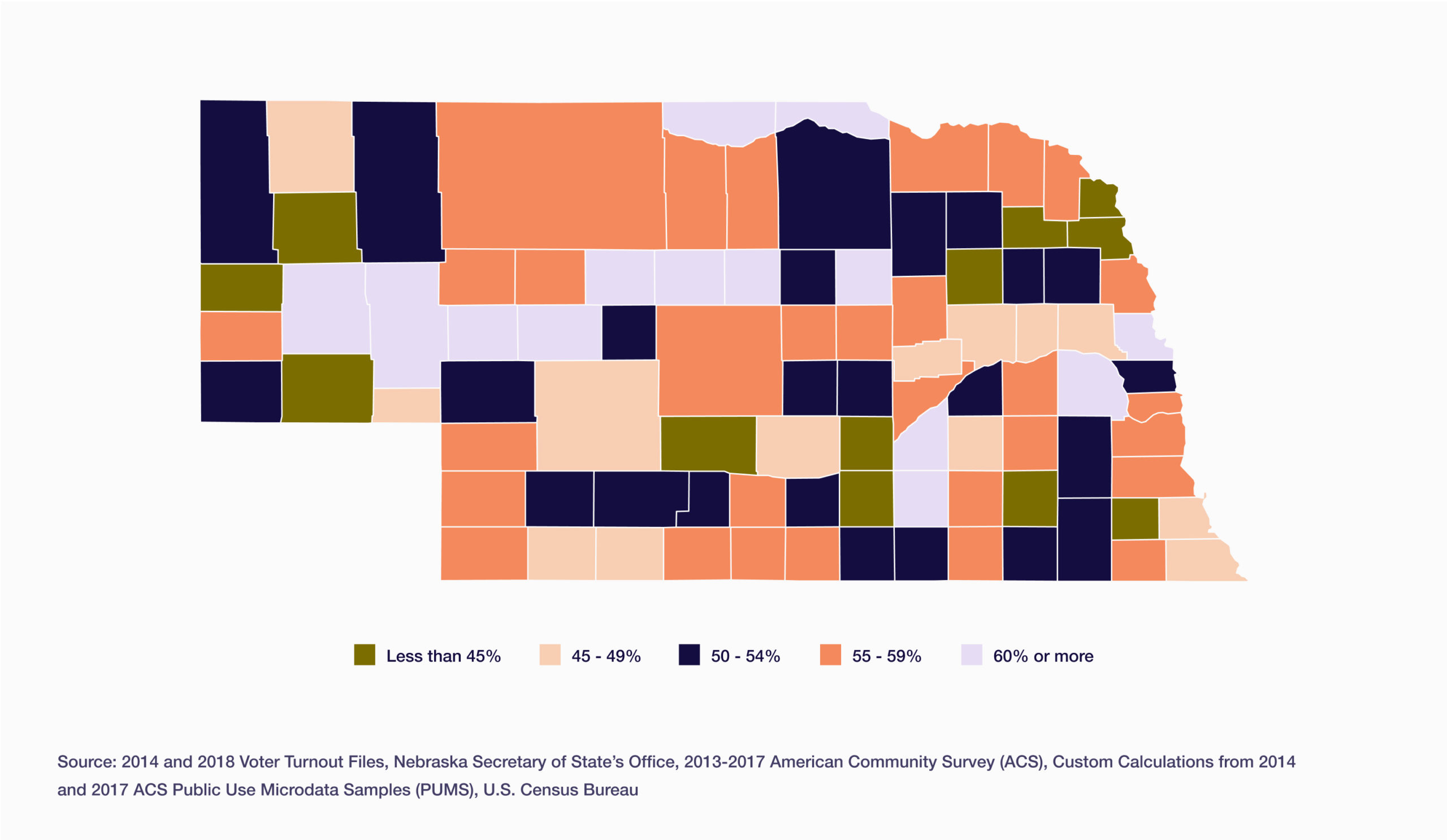 These trends also align with the data that suggests the people with lower levels of education and income tend to be less likely to be politically involved through contacting public officials or discussing politics with family or friends. Lower levels of political participation among persons of color, persons with lower-income, and in certain geographies means that these groups and areas are underrepresented in the election of officials who make decisions, potentially undermining the accountability of elected officials to all constituencies.

In the CPAR analysis, the 2018 turnout data aligns with the CPS estimation at 51% turnout for the 2018 Midterm election, but registration data was significantly higher than the CPS estimates, with only 11% of eligible voters not registered to vote for the 2018 election. 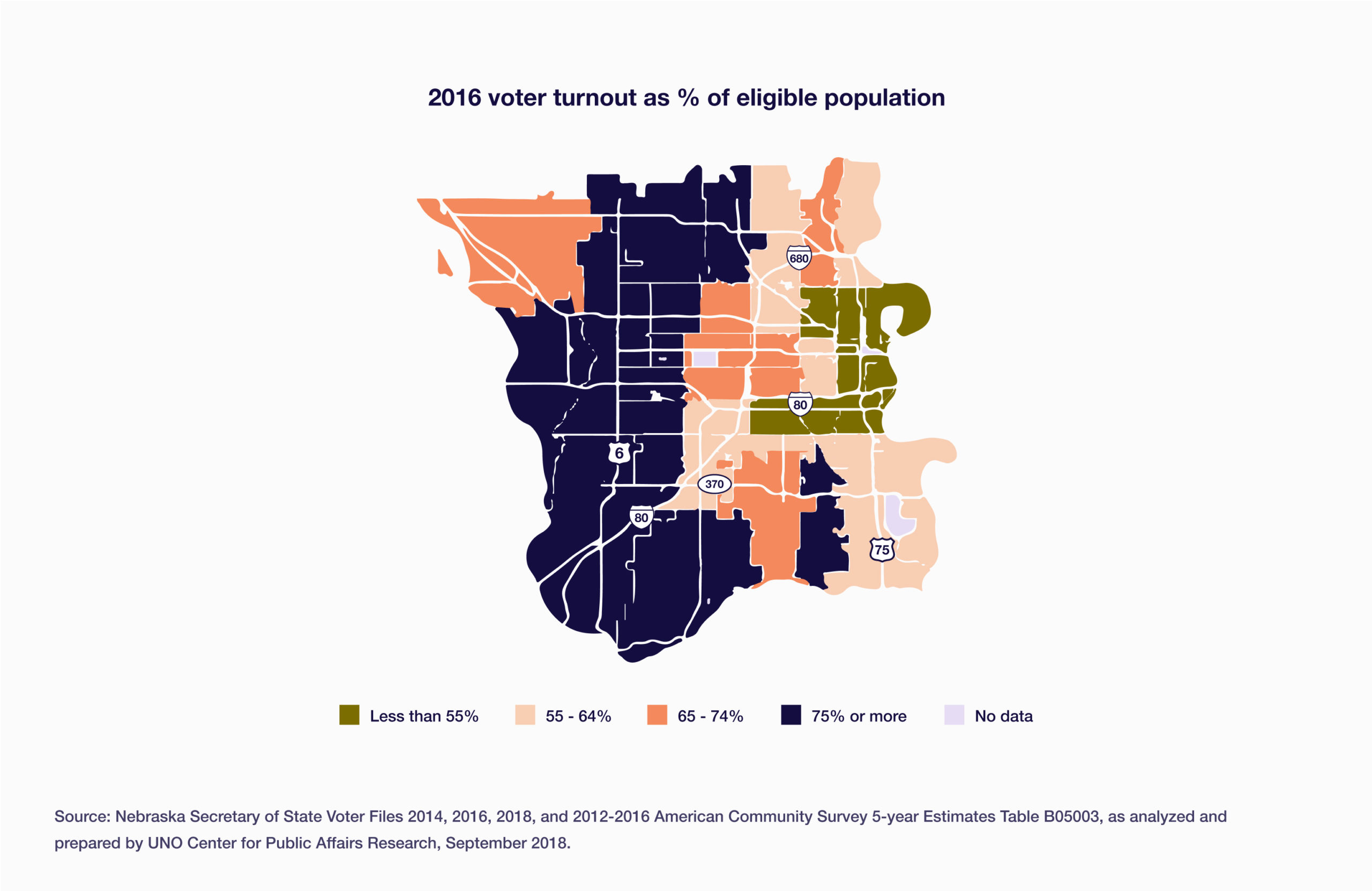 In all age groups turnout of eligible voters was up in 2018 from 2014, with the largest gains being made among younger age-groups. Despite increases, younger age groups still vote at a significantly lower rate than older age groups. 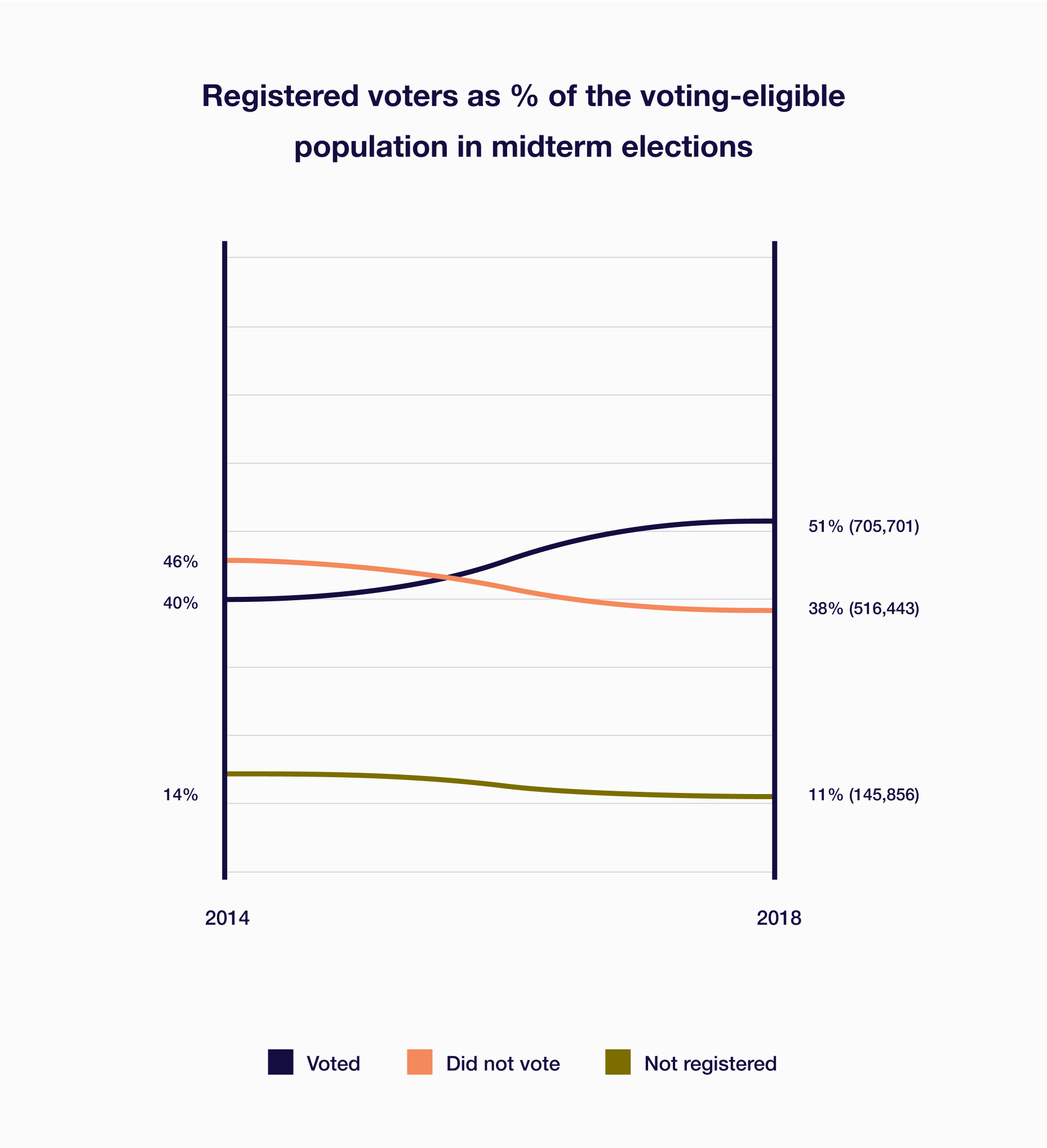 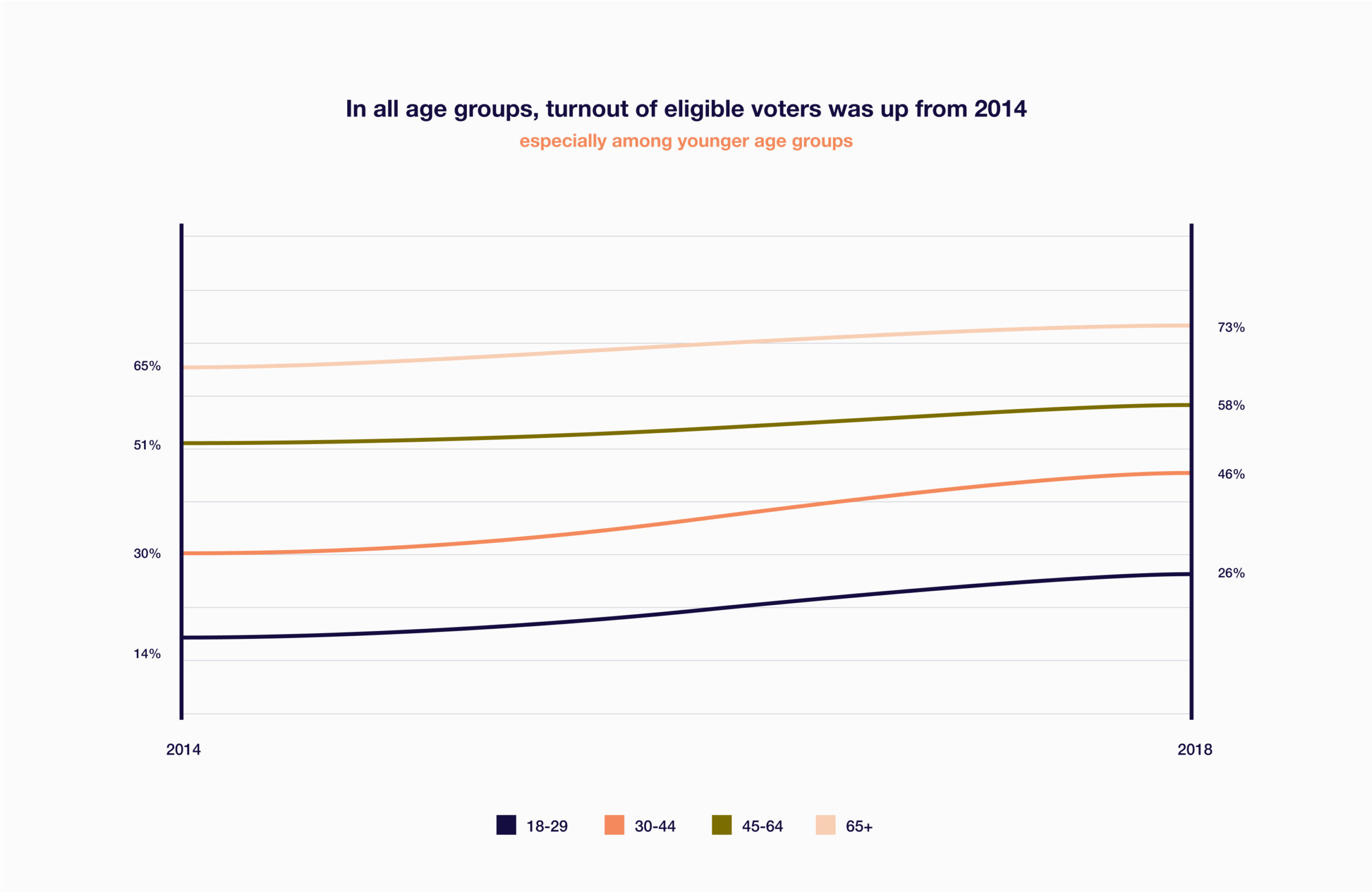 Nebraskans are far more likely to discuss politics with friends and family instead of neighbors.

As noted earlier, college graduates are more likely than those with lower levels of educational attainment to discuss politics or societal issues with friends, family, and neighbors.

Examining civil discourse in the online sphere shows the vast majority of Nebraskans (8 out of 10) claim to not post their political views on social media. Interestingly, there weren’t significant differences between age for this variable. 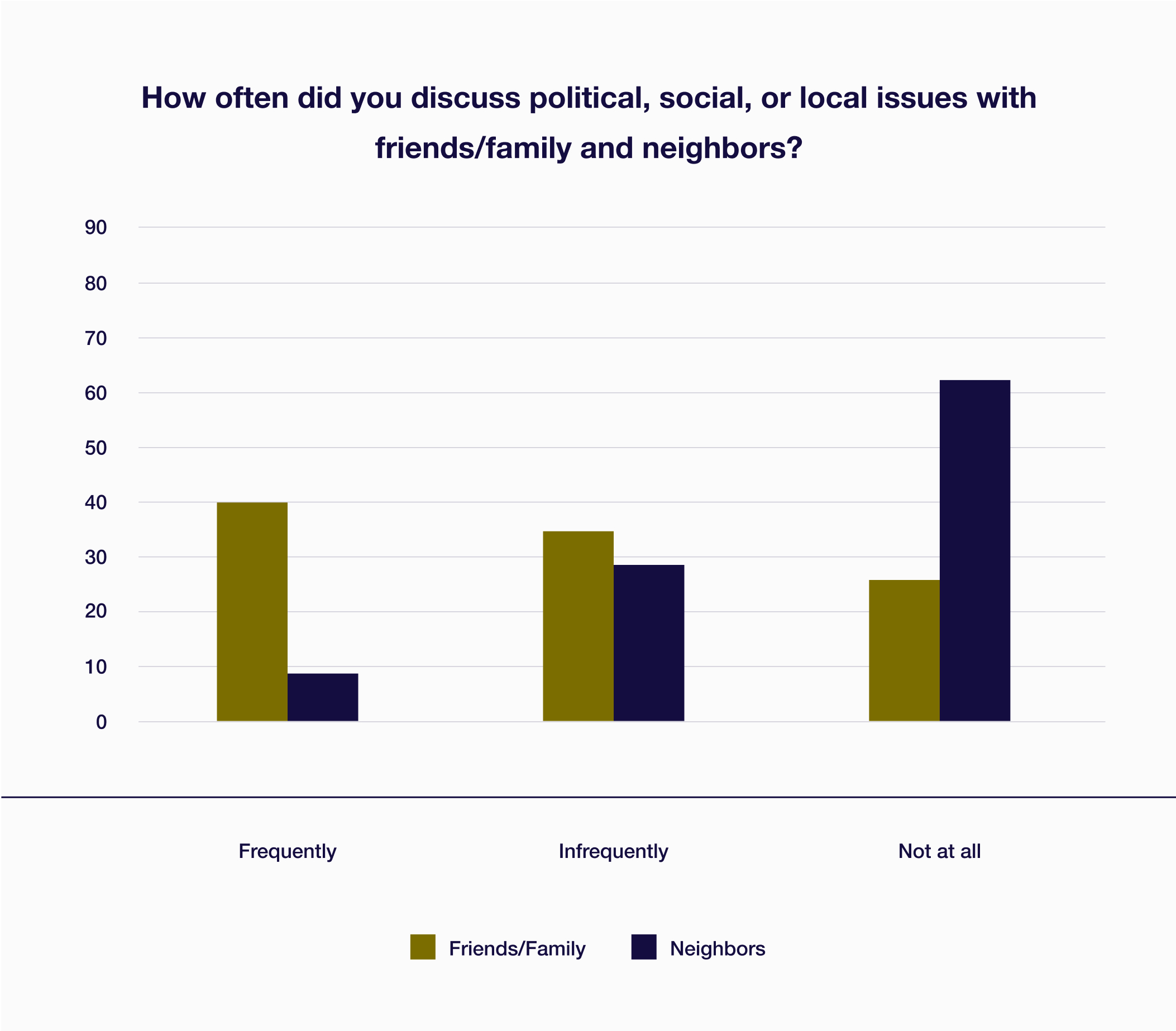 Nationwide polls indicate that just 2% of Americans have ever run for office. Anecdotally, it is said to be difficult to find people to run for public office, particularly for local offices in rural areas of the state. Competitive races for public office (races where candidates don’t run unopposed) provide voters a choice of visions and candidates, and can indicate, to some extent, participation in the political process. 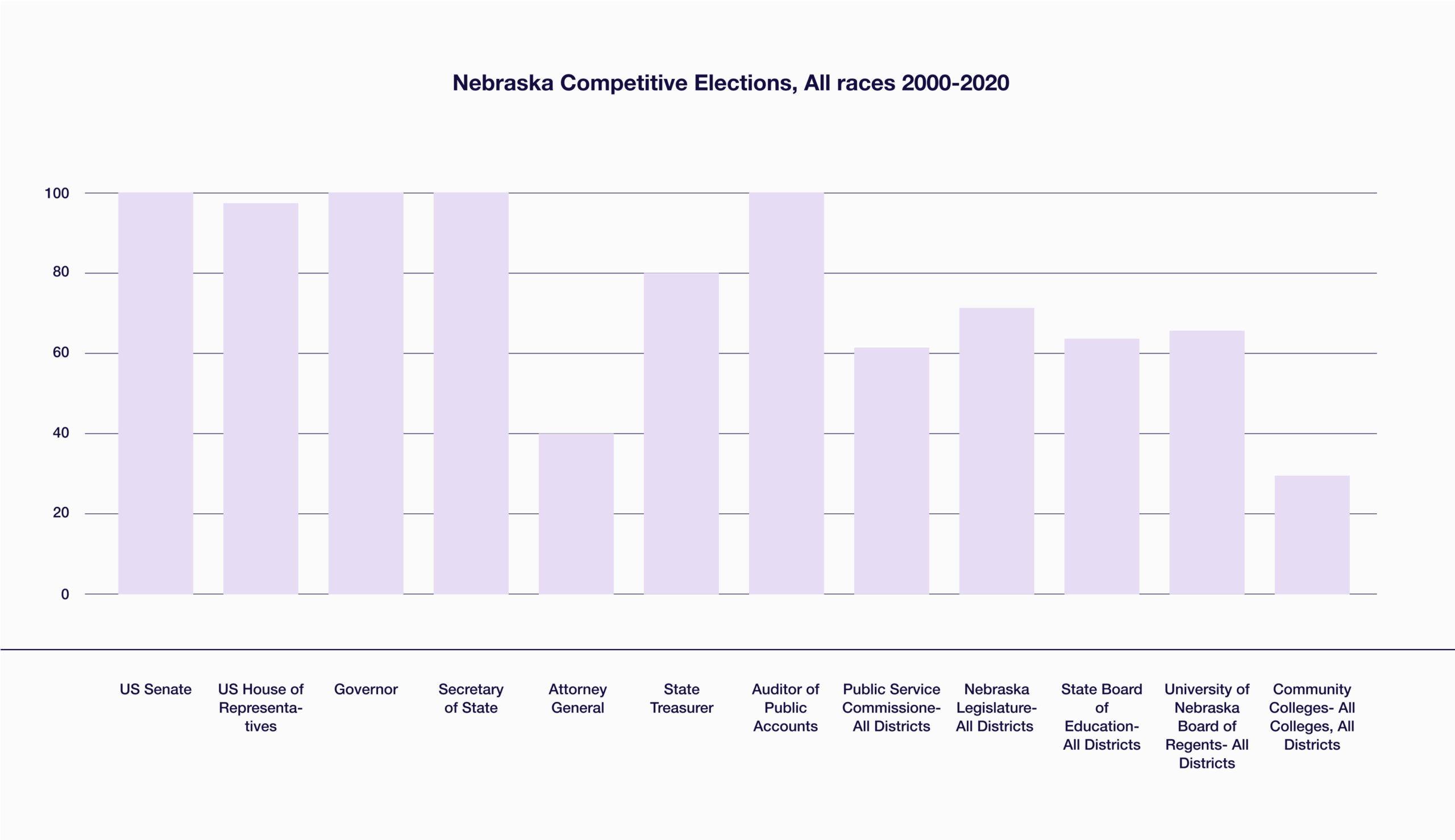 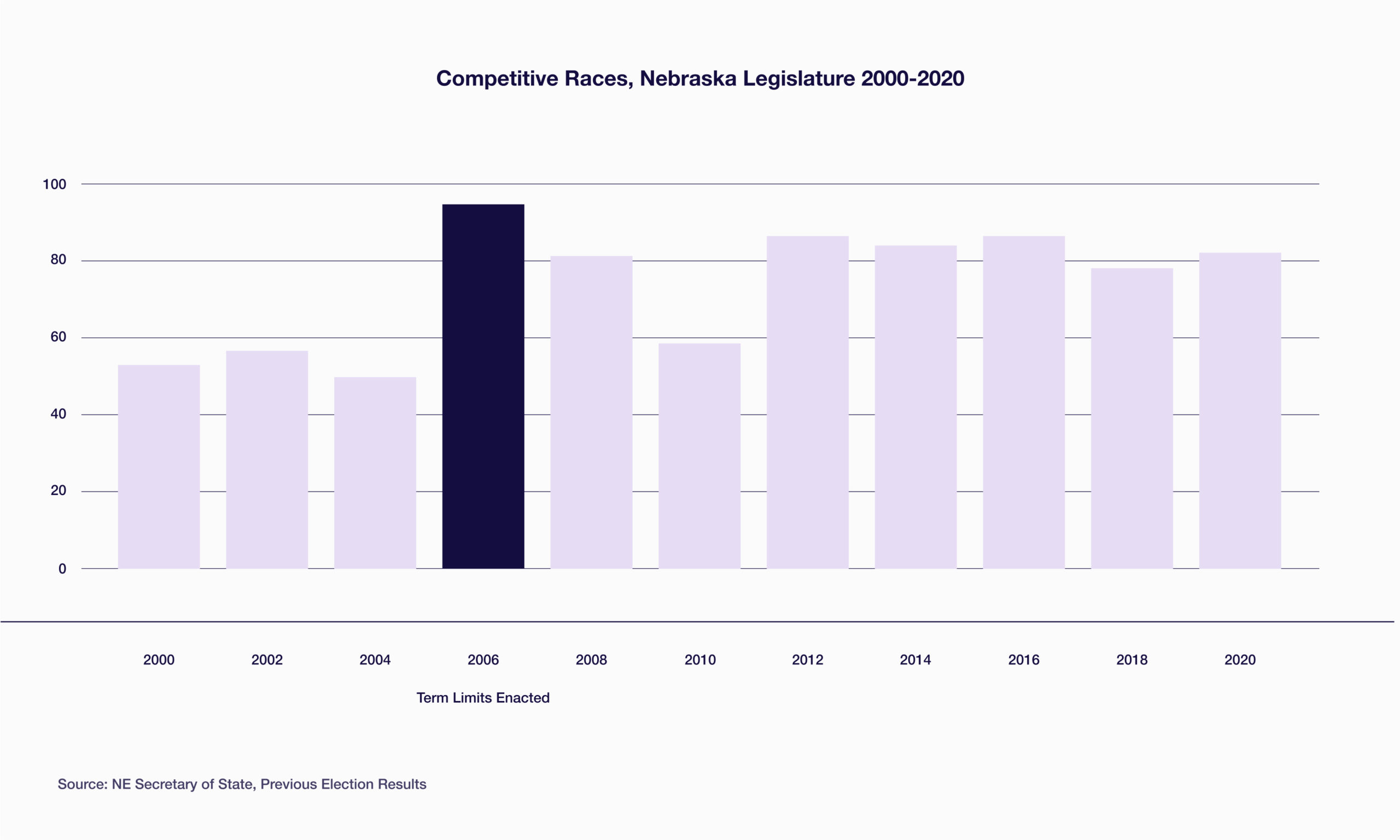 Some controversy has surrounded this change, however, with proponents arguing the higher rate of turn-over is beneficial by getting more people involved and opponents saying it undermines expertise of the body as a whole and ability to address long-term issues.