Cooperation, connection and mutual confidence in a crisis

If a time of crisis is the make-or-break fourth quarter of a big game, how a community works together in the day-to-day is the practice field where winning habits of resilience are built.

In times of crisis, we rely on others to help us make it through. The University of Nebraska Rural Poll, partners on our team that is building our 2020 Civic Health Index, has released new data on how rural Nebraskans rate their communities’ and their own resiliency, with particular emphasis on this year’s ongoing pandemic.

This new release from spring 2020 focuses on topics like confidence in their community to come together in hard times, their confidence in making a positive contribution, and confidence in public officials to respond to the crisis. 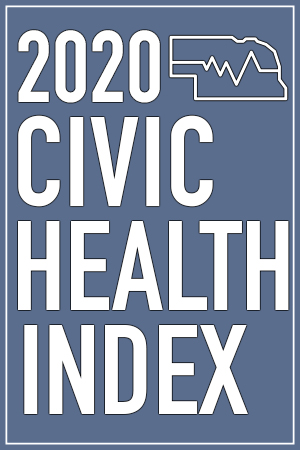 Other areas of strength were over six in 10 respondents’ belief in the ability of people to work together to improve the community, belief that they can depend on people to come to their assistance in a crisis, and belief that there is trust among residents in their community.

Responses to other survey questions revealed some areas for improvement: only 48 percent believe all people are treated fairly no matter their background, only 47 percent agreed their communities actively prepare for disasters, and 43 percent believed that people in their community trust public officials.

These insights track well with recent findings and discussion as we prepare the 2020 edition of the Nebraska Civic Health Index. If a time of crisis is the make-or-break fourth quarter of a big game, how a community works together in the day to day is the practice field where winning habits of resilience are built.

In addition, 40 percent of Nebraskans frequently volunteers and nearly everyone else responded that they volunteer once in a while. These data points suggest a majority of Nebraskans are pretty good about building relationships they can count on in a crisis and making habits out of lending a hand.

But there’s also work to do. Only 51 percent of Nebraskans frequently spend time with people from different backgrounds. Attendees of this spring’s Civic Health Summit focus groups mentioned that this lack of connection can lead to mistrust and racial inequity. This mirrors the Rural Poll’s data point that less than half of rural Nebraskans believe people are treated fairly regardless of their background.

As we’ve seen during disasters prior to as well as with the ongoing pandemic, civic health isn’t just nice to have. It’s essential. Working together, social connections and trust in institutions are make-or-break in times of crisis.

The Rural Poll sheds helpful light on where we have good building blocks of resiliency – and where we can improve.