Early voting in Nebraska: ‘Everyone is prepared to do their civic duty’

In the era of coronavirus, Nebraskans are turning out to vote early in person, too. Voters, county clerks, and election commissioners all are rolling with the punches in an unusual election year.

These are just some of the feelings expressed by Nebraskans participating in early voting for the 2020 general election, whether in person at their county election commission office, through a mail-in ballot, or by depositing an early ballot into drop boxes throughout the state.

Shively has watched hundreds of people arrive at the office in Lincoln to vote in person and drop off early voting ballots during the weeks prior to Election Day, taking selfies by the front sign and ballot drop box to share their enthusiasm.

The office is limiting the total number of people who can enter and encouraging those waiting in line to follow social distancing guidelines. The COVID-19 pandemic greatly increased the focus on early-voting options across the state to help election officials maintain safety for employees, poll workers, and the public.

“I’m mostly worried about coronavirus,” said Kayla Harbour as she waited in line with a friend outside the Lancaster County election commission on Oct. 29.

Harbour said she hoped others voting early would have the same mindset and take precautions against spreading COVID-19 by wearing masks and staying socially distanced.

“Everybody is prepared to do their civic duty,” she said.

She said that overall, she’s anxious about the outcome of the election. “I think humans overall are good, and we all want substantial change. It’s on you to take the initiative so it stays in your favor.”

For smaller counties, where the election commission falls under the umbrella of services provided by county clerks’ offices, early voting has been particularly important in allowing daily operations to continue with minimal interruption.

“We have been busy all day long, with lines out of the office,” Seward County Clerk Sherry Schweitzer said – in part due to social distancing guidelines encouraging members of the public to stay six feet apart.

“It looks different from four years ago.”

Seward County saw early voting numbers nearly quadruple for the 2020 general election. By comparison, it was typical to have just 1,000 early votes come in before a general election, Schweitzer said.

Schweitzer said she hopes the emphasis on early voting in 2020 helps the process catch on in future elections. “To me, I always say convenience is the name of the game,” she said.

It’s a sentiment echoed by other county clerks. By requesting an early ballot, voters can take more time to consider the candidates and issues on their ballots from the privacy of their homes. Each county tracks how many early ballots were issued, and how many are received to be counted toward the election.

“We do our best to make it secure,” said Patti Lindgren, Saunders County clerk. “For anyone concerned, talk to your county clerk and election commission. The Secretary of State is another great resource.”

Mark Murphy of Ashland said he would have preferred to vote on Election Day, but decided to vote early in person after visiting the Saunders County courthouse on Oct. 28 while in Wahoo.

He said he was concerned about long lines on Nov. 3, but also about sending in an early ballot through the mail or a drop box. By voting in person, he avoided long wait times and said he felt secure about his ballot and the integrity of the election process.

Saunders County has seen an increase in early ballots. The county has issued 5,529 for the 2020 general election compared to 1,650 early votes received in 2016, which was a high count at the time.

Gage County has also had more than 7,500 requests for early ballots this election. Gage County Clerk Dawn Hill said in-person voting at the county office has been steady.

Nebraskans with early vote-at-home ballots should not mail them at this point. Instead, drop them in a secure county drop box. Click here for a map of every drop box in the state. 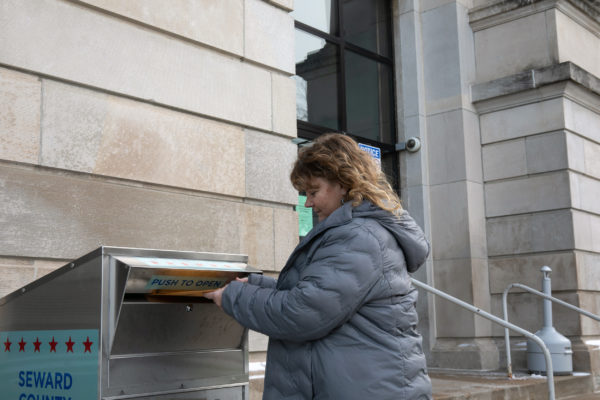 Terri Roth drops her ballot into the ballot drop box outside of the Seward County courthouse during the last week of October. This is the first time she has voted early for an election, as a way to stay safe and help others stay healthy during the pandemic. 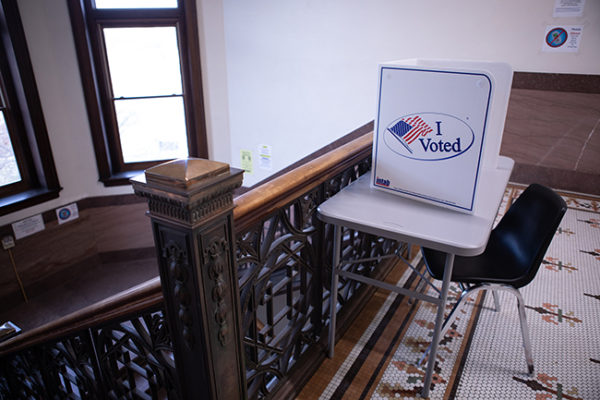 A polling booth for early voting looks over the stairs leading to the third floor of the Saunders County courthouse, where the county clerk’s office is located. The office handles not only elections, but marriage licenses, auto registrations, and county commissioners’ requests and meetings, among other duties. Along with voting early in person, the county also has a dropbox to receive early votes outside of the courthouse. 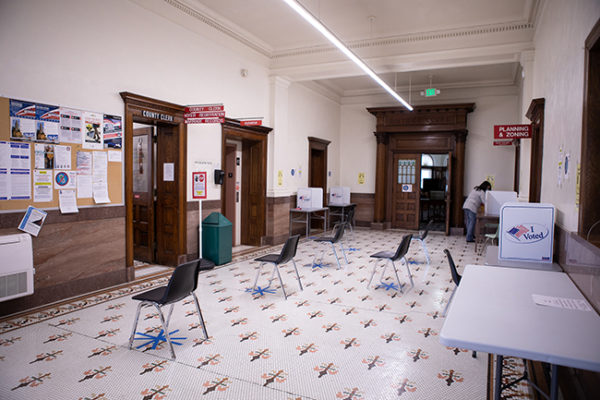 Saunders County Clerk office staff wipe down polling booths and chairs as residents fill out early ballots for the general election. Chairs are placed six feet apart in the hallway outside the clerk’s office on the third floor of the courthouse in Wahoo. Only one person is allowed inside the clerk’s office at a time to protect employees and the public from COVID-19. Along with chairs, polling booths are spaced along in the hallway for early voting. 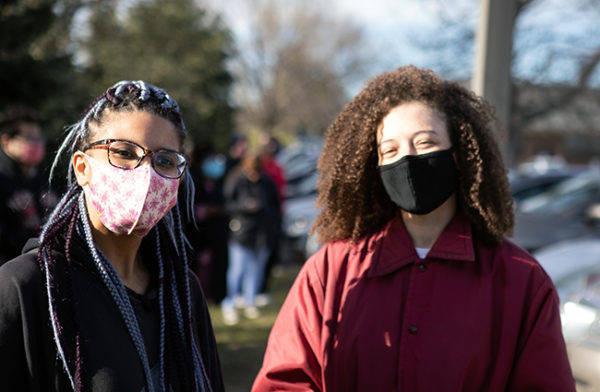 Kayla Harbour, left, waits with her friend Raimy in line outside the Lancaster County Election Commission near 45th and Vine streets in Lincoln. Harbour said she was worried about coronavirus exposure with busy polling places on Election Day and was excited to see that others in line for early voting were wearing masks and following social distancing guidelines. “Everybody is prepared to do their civic duty,” Harbour said.

PrevPreviousAmid an avalanche of dread, allow goodness to snowball
NextEclectic Collage: Music for Election Day 2020Next