FAQs about voting in the 2020 Nebraska Primary

Nebraska's 2020 primary election is May 12. With the continued concern regarding COVID-19, it's going to look different from past Election Days. Here are some frequently asked questions about participating in this spring's election.

Nebraska’s 2020 primary election is May 12. With the continued concern over the spread and impact of COVID-19, it’s going to look different from past Election Days in the Cornhusker State. Are you ready? Here are some frequently asked questions about participating in this year’s Nebraska primary.

Will polling places be open this year in light of COVID-19?

Yes. State officials have said and have reiterated that the state will hold its primary May 12 as mandated by state law, with open polls for in-person voting. Secretary of State Bob Evnen has indicated precincts will follow careful distancing and sanitization guidelines. In addition, each in-person voter May 12 will receive their own black pen with which to vote, which they can keep.

Because these are especially unpredictable times, anything is possible. If any polls are closed amid coronavirus concerns, we will be sure to share that information here and across all of our communication channels. If you have concerns that your usual polling place will be closed, contact your county’s election commissioner’s office.

Where can I get a look at our 2020 primary ballot?

The statewide and federal sample ballots for May 12, 2020, primaries are here. You can look through the Democratic, Republican, Libertarian, and various nonpartisan ballots, as well as see who is appearing in each local race for statewide office. Your local newspaper of record will run ballots that will include local and county races.

For more about each office and its responsibilities, see our 2020 DECODING THE BALLOT for the Nebraska Primary.

I’m a registered nonpartisan. Can I vote in the primary election?

Yes, absolutely. Registered nonpartisans can vote for all nonpartisan offices, like the Nebraska Legislature. They also can pick which party’s primary they would like to vote in for other offices.

Are there differences between the nonpartisan primary ballot options?
Yes. Every nonpartisan ballot includes offices for Nebraska Legislature, Board of Education, Board of Regents, Learning Community, Community College Board, Public Power District, Natural Resource District, and ballot initiatives. Nonpartisan 2020 Republican ballots include races for U.S. Senate and U.S. House of Representatives. Nonpartisan 2020 Libertarian ballots include races for president, U.S. Senate, U.S. House of Representatives, and public service commissioner. And nonpartisan 2020 Democratic ballots include all of the races on the partisan Democratic ballot.
Is nonpartisan the same as “independent?”
Yes. Nonpartisan is the official terminology in Nebraska for voters who identify as independent when they opt out of registering under one of the three parties.
I can’t remember if I’m registered to vote. Is there some way I can check?
Yes. Go here to check — and double-check. It takes 30 seconds. 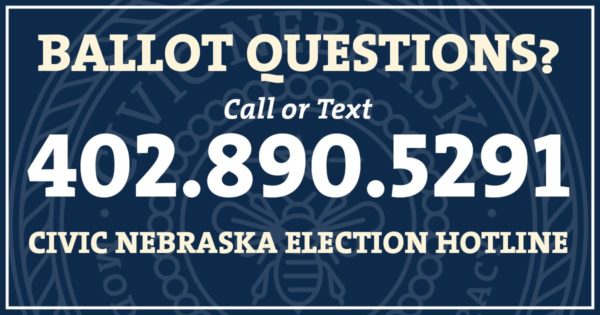 I want to vote in person on May 12. Will all precincts be open, or will that also change because of the virus?

It will vary from county to county. As vote-by-mail numbers continue to increase, county officials are consolidating polling places to reduce the risk of COVID-19. Check with your county’s election commissioner to ensure you’re going to the right polling place this year.

When are the polls open?

I can’t remember where my polling place is. Is there a way to double-check beforehand?

Yes. Click here. Enter your address and your polling place will be displayed. Still not sure where it’s at? Look for it on Google Maps. Again, with COVID-19, some high-risk polling places – such as ones in care centers – may be consolidating with others. If you have any questions, contact your county’s election commissioner office.

If I’m in line when the polls close but I have yet to vote, do I still get to vote?

Yes! Stay in line AT AN APPROPRIATE PHYSICAL DISTANCE. As long as you are in line at 8 p.m. in the Central Time Zone or 7 p.m. in the Mountain Time Zone, you must be allowed to vote.

I want to be an election observer on Election Day. How do I do that?

Civic Nebraska is training nonpartisan election observers for the May 12 primary right up through May 11, the day before Nebraskans go to the polls. You’ll need to go through this short training and sign up for a time slot and polling station. Our field organizers Mike Forsythe (Lincoln, Omaha) and Margaret Marsh (Greater Nebraska) can answer any questions for you and help get you set up.

What do I do if I’m denied a ballot?

This is serious business, and we should know about it right away. If you have been denied a ballot for any reason, we encourage you to contact Civic Nebraska’s Election Protection Hotline at 402.890.5291, or via email at info@civicnebraska.org, via Facebook or Twitter (either on or before Election Day).

Do I have to show an ID on Election Day to vote?

No. Identification is not required to vote in Nebraska. The only exception is if you’re a first-time voter, you registered to vote by mail, and did not send in a copy of your ID at that time. If you are asked to present ID at your polling place, call Civic Nebraska’s Election Protection Hotline at 402-890-5291, email us at info@civicnebraska.org, or hit us up on Facebook or Twitter.

Is it too late to vote by mail?

Yes. Officials had to receive vote-by-mail request forms by Friday, May 1, 2020.

I got a mail-in ballot, but haven’t returned it yet. Can I still mail it in?

No. To ensure it is counted, you should deliver it directly to your county election office dropbox.

Is voting by mail safe?

Is it easy to commit fraud via vote-by-mail?

Vote-by-mail makes it hard to cheat. If someone duplicated a ballot and attempted to vote twice, the Election Management System would accept the first returned ballot but flag an error when the second ballot was received. If someone intercepted another voter’s ballot, they would have to steam it open, fill it out, re-seal it, successfully forge a signature, and return it – all while hoping that the intended recipient doesn’t notice it’s an election year and they didn’t get a ballot. More on the safety, security, and nonpartisan benefits of vote-by-mail is here.

Do I have to request a mail-in ballot if I want to vote by mail in November, too?

Yes. You must request a vote-by-mail ballot before each election. The request forms that voters are receiving this spring are only for the May 12 primary. Some counties give you the option to be added to their permanent Early Vote/Absentee Request Form list. Tick that box, and you’ll receive a mail-in ballot request card about six weeks before every subsequent election.

My county is one of the 11 in Nebraska doing all-vote-by-mail this year. How does this affect me?

Luckily, it doesn’t – nothing will change for your county. You should have received your full primary ballot in the U.S. Mail prior to the election, as scheduled. Complete it and follow the simple instructions to return it, and you’re all done.

Was there early in-person voting in Nebraska this primary season?

This year, more than ever, it’s important to know the facts about our elections and your rights as a voter. So if there’s something we didn’t cover here, let us know at info@civicnebraska.org.