Through asset mapping and community conversations, Collective Impact Lincoln works with local leaders to turn community needs into policy ideas. Neighborhood leaders can push for policies that improve the lives of their community members and all Lincoln residents. Collective Impact Lincoln connects leaders to boards and community leadership positions, policy campaigns, and training opportunities. Neighbors advocate for affordable, quality housing policies by engaging in activities like:

Among the nearly 300 comments about housing, neighbors often said they liked their house, quality of life, and landlord. Homeowners often said they were happy with their housing and neighborhood. Many mentioned that their landlord was responsive to their concerns. Most (77% of respondents18) said their tenant-landlord relationship was “Great” or “Mostly Good.”

Rent was often seen as too high. A few neighbors reported concerns with landlords, such as not making repairs. About a third (38%¹⁹) said they there had been a time when they had to choose between paying for necessities or for housing.

Neighbors are nice. Help Each other out, kids play outside, very safe neighborhood.

Lives in their own trailer – owns. Landlord won't fix things in their trailer park. Pays for services but it's not great.

Lived here for 30 years, housing concern is about vacant houses, knows there is a need for housing but sees vacant homes and is concerned.

Love landlord, great apartment and affordable. She is interested in buying a home in the future, but sees the cost rising and the value/ quality of housing decreasing. 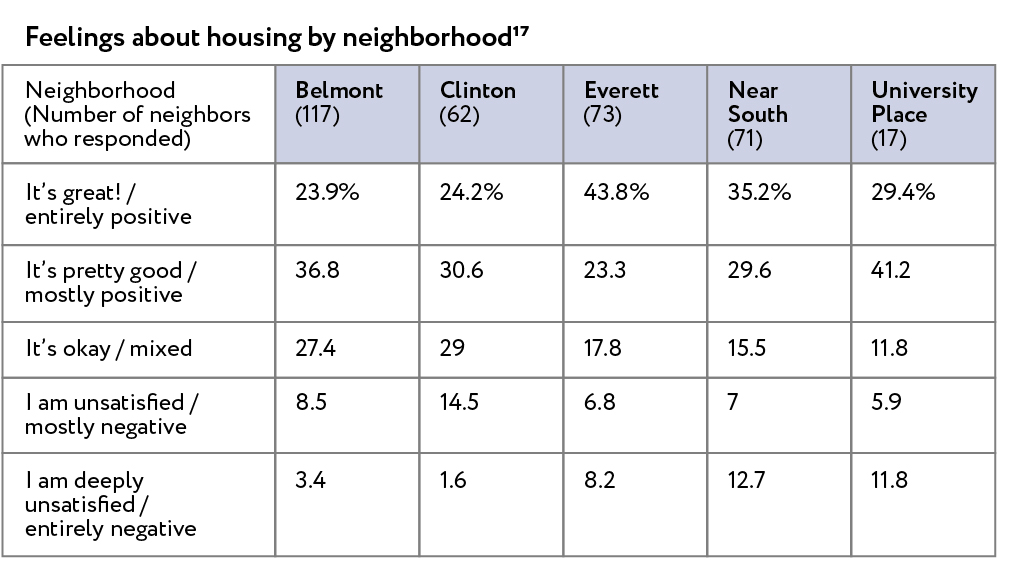 About half (47%20) said it would be useful to contact an authority about their concern. Not surprisingly, residents also were split regarding their willingness to contact someone about their concerns. Only 49% of respondents21 said they had raised the issue they mentioned with someone else. When people did contact or talk to someone about an issue of concern, they most often talked with friends.

Although few (only 78) respondents discussed reasons for not contacting a government official about an issue, among those who did, the most commonly mentioned barriers were:

Lack of trust in the government (mentioned by 28%)

Not knowing how to reach out or make the contact (24%)

Some also mentioned they felt their efforts would be a waste of time (13%), that they had previously tried to make contact and were discouraged by their experience (10%) or that they felt it would take too long (6%). For example: 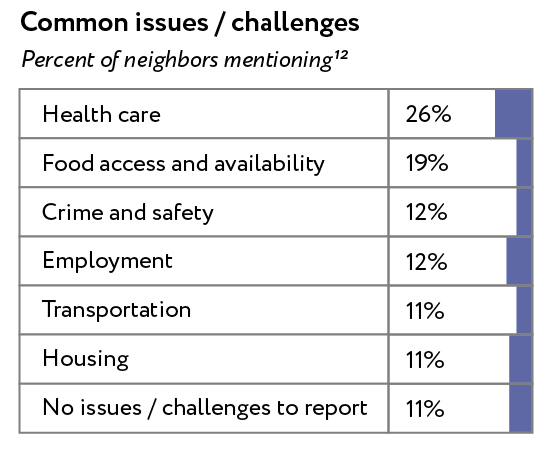 She currently doesn't feel comfortable talking to city officials, because she doesn't know how to talk to them.

Has only talked to neighbors and friends. Doesn't feel like contact to an official would be useful for fear of getting kicked out of her housing.

Neighbors said they wanted more community interaction from government officials (such as senators council members) and city workers (such as police). Those with children said they liked their local schools, which are often a hub for information about community activities and services. Churches and community centers also were hubs for information, social connection, and services:

They love the schools and the neighborhood center is good.

The city does a good job of taking care of their service needs. Had an ash tree and they came and cut it promptly.

Appreciates churches in neighborhood, Foodnet operates in churches. Churches care about the neighborhood. F Street Church and Mercy City are both nice.

Some were concerned about the unequal treatment between neighborhoods in the city. Good lighting and sidewalk repairs, as well as regular maintenance to trees and parks, are popular desires.

Total loss of confidence in institutions. Feels the north side has been ignored and used by the city. Roads are bad. Misuse of resources meant for these neighborhoods.

Would like to see some of the services that go to the south come to the north (e.g., stores, sites). Happy with city service.

He works with [redacted] and sees a lot of the suburbia areas getting way more attention sooner than this area. Says it could be the fact that this is generally lower income and therefore less of a city priority in terms of upkeep. Likewise people in these types of neighborhoods are less likely to report things to the city because they assume they are uncared for. ìI live in the ghettos so this is what i should expect.

A total of 290 neighbors shared how they stay updated on community issues:

Neighborhoods were canvassed by community organizers over the course of three years from 2017 – 2020. With more than 15,000 interactions and over 900 interviews, the CIL Team worked to collect information from all 6 neighborhoods. A team of community organizers and volunteers knocked on doors as determined by a canvassing tool to interview residents. Each interview typically lasted 5 to 45 minutes in length, and covered a variety of topics from what residents liked and disliked about their neighborhood, to specific issues of concern such as housing, jobs, or transportation. Sometimes, these interviews would take place at community locations, like Educare, though often they were collected door-to-door. Comments from residents were summarized by the CIL team and typed into a database, and thus, do not represent exact quotes from neighbors.

Data from the interviews was collected in one of two different database tools: a Google Form and a VAN database. These two data sets included a variety of information that was coded and analyzed separately first, and then merged together into a single dataset for analyses. Comments from neighbors were coded based on the questions to which they were responding. Neighborhood location was estimated by zip code, canvasser, and/or Census tract where noted. Demographic information was often not reported by interviewees, and was instead estimated based on Census data organized by related neighborhood Census tract. Neighborhood demographics estimated using Census Tract data from the U.S. Census Bureau, American Community Survey, 2015-2019 5-year estimates, Tables S1701, DP05.

Data was analyzed by an external third-party, the University of Nebraska Public Policy Center.