Unicameral Postcard (2)In the light of Valentine’s Day, nothing deserves more love than Nebraska’s Unicameral Legislature. Especially since some senators want to turn it into a partisan Washington DC style legislature. So sit down with the chocolates that you bought for yourself and get your daily dose of history of the unicameral.

The unicameral was first proposed by Republican U.S. Senator George Norris from McCook, Nebraska. He campaigned across the state for a nonpartisan unicameral state legislature to, first and foremost, weaken the power of political parties and, secondly, make the legislature more accountable to the people.

An advocate of nonpartisanship, Norris, believed a nonpartisan unicameral would allow senators to concentrate on local interests without being influenced by national party lines, believing that party lines had little to do with local government. The theory: One who votes according to party lines might vote for a state candidate who disagrees with the senator on matters over which the senator will have jurisdiction.

Being a nonpartisan legislature means that a candidate’s political party is not listed on the election ballot. The two candidates who obtain the most votes in the primary election face each other in the general election. In other states, each party selects a winner in the primary, and the winners of each party run against each other in the general election.

Unlike all other states, Nebraska’s legislative leadership is not based on party affiliation.

Norris worked to eliminate partisanship in the legislature because he believed that elected officials would stand on their own records. Nonpartisanship would allow lawmakers to base their actions on their own convictions and the needs of their districts, rather than according to party dictates.

According to a report published by the Pew Research Center in 2016, partisanship in the US is at its highest in decades, with Democrats and Republicans viewing those from the opposite party with increasing hostility. At the same time, and likely as a reaction to hyper partisanship and political gridlock, a recent Gallup poll reports a growing number of Americans are disengaging from both political parties and registering to vote as Independents. Millennials, especially, are rejecting the two party system at a greater rate than previous generations.

Nebraska has stood out not only as a unicameral legislature, but also as a nonpartisan body with unique legislative rules, statutes, and constitutional provisions that shield it from partisan influences, and provides incentives for legislators to remain non-partisan and be accountable to their constituents and not one political party.

Our system is transformational in that it has built in strong institutional incentives for its legislators to cross traditional ideological lines, be trustworthy, and find compromise. Unfortunately, that tradition is under attack right now.

So show your Unicameral love by sharing this post and making this your profile picture on Valentines Day! 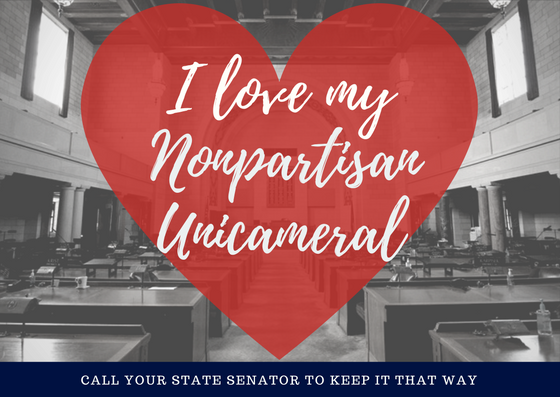