In May, donate to democracy

In Lincoln and Omaha, May is the month for giving -- both cities will host 24-hour giving events to benefit each area's nonprofits. Here's why a gift to Civic Nebraska is a donation to democracy.

May is the month for giving in Lincoln and Omaha. Both cities host 24-hour giving events to benefit their local and area nonprofits — like Civic Nebraska. Omaha’s signature event, Omaha Gives!, is up first on May 23. And Lincoln’s big day is just eight days later, as Give to Lincoln Day rolls out on May 31.

Be sure to remember those dates! Or, don’t — because now, thanks to scheduled giving, you can make your donation before each event’s official day, and your gift will still count as part of its 24-hour tally. Cool, huh? We like to think of scheduled giving like early voting: It’s a way to conveniently take care of business ahead of time and to ensure your contribution counts, because you never know what might keep you from participating on the actual day of the event.

Go here to give to Civic Nebraska as part of Omaha Gives!

Giving early (and often) to Civic Nebraska means you are donating to democracy in the Cornhusker State. Sound abstract? It’s actually quite clear: We build engaged and informed Nebraskans from age 6 to 106.

Lincolnites, your Give To Lincoln Day contribution to Civic Nebraska enables us to run Community Learning Centers at Campbell Elementary and Dawes Middle School. We’re proud of the growth we see in the youth who participate in our learning opportunities — in essential areas of active citizenship including critical thinking, problem-solving, and community engagement.

Gifts to Civic Nebraska for both Omaha Gives! and Give To Lincoln Day also enhance our civic health initiatives in towns and cities around our state. A more modern and robust democracy for all Nebraskans requires engaged and informed Nebraskans who take action in their communities in substantive ways. We strengthen our state’s civic fabric through training, connection, and enrichment for Nebraska towns, cities and neighborhoods, and their citizens.

And, of course, once Nebraskans are informed and engaged, our voting rights program ensures our elections and civic institutions are nonpartisan, accessible, and accountable. We’re the only group in Nebraska specializing in nonpartisan individual voting-rights research, policy advocacy, observation, investigation, and litigation. 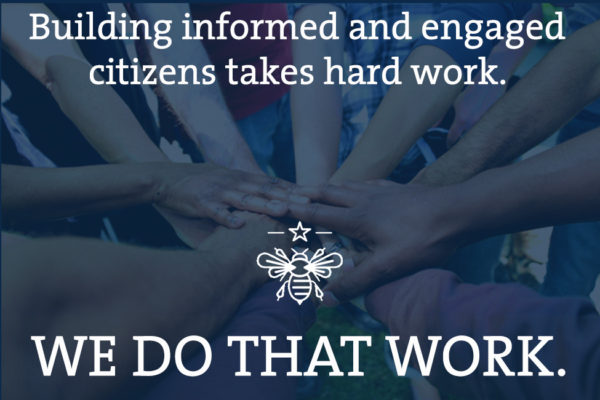