Voting is our most important American right. Without it, there is no avenue for change, no way for citizens to truly hold leaders accountable, no way for our collective values to take shape in our institutions and our society. That’s why Civic Nebraska fights for elections to be fair, modern, and accessible – in 2022, we redoubled our efforts to defeat bad policies and initiatives that threaten this most precious right.

Make no mistake: Nebraskans’ voting rights are under attack. In the past year, anti-democratic forces have pushed forward a rewrite of the Nebraska Constitution to hinder tens of thousands of our state’s eligible voters. Civic Nebraska led opposition to these and other assaults, which also included sweeping campaigns to undermine Nebraskans’ faith in our institutions. We organized, educated, and advocated on behalf of every Nebraska voter. In November, we deployed nonpartisan Election Protectors to ensure our elections ran smoothly. We battled harmful voter ID initiatives in the Nebraska Legislature and on the campaign trail, and we redoubled our efforts to bring more Nebraskans, including returning citizens, to the franchise.

›› Improving Nebraska’s election infrastructure. We worked closely with state lawmakers on a sweeping bill making meaningful upgrades to our elections, including the establishment of statewide standards for ballot dropboxes, processes to keep voter rolls current and accurate, and methods for ensuring voting is inclusive for all Nebraskans.

›› Countering conspiracy theories. To counter the rising noise about election integrity, Civic Nebraska launched Safe, Secure, Certified – a statewide campaign that builds faith in Nebraska’s elections systems and the bipartisan guardrails that ensure they remain a model for the nation. We also worked with the Secretary of State’s Office to address false claims by bad actors about the 2020 election in Nebraska.

›› Stopping bad bills and initiatives. As the fight to protect voters against harmful restrictions returns to the Nebraska Legislature, Civic Nebraska is working tirelessly to protect Nebraska voters’ ability and opportunity to vote. Casting a ballot freely and fairly is fundamental to democracy, and all of us must be ready, willing, and able to step up and protect it.

The number of ballots cast in Nebraska’s 2022 primary, the highest participation in a gubernatorial primary election in the history of the state.

Phone calls, texts, emails, and doors knocked by our Voting Rights Initiatives team to get out the vote throughout 2022.

The estimated number of Nebraskans who will be immediately disenfranchised if the Legislature enacts a strict voter ID measure in 2023.

I stepped into the role of director of voting rights in July 2022, after three years at Civic Nebraska. I’ve prepared for this challenge by building a foundation of organizing and engaging with voters across the state. This work – which has involved relationship-building, coalition-managing, and so much more – has deepened my connection to my state and her people. 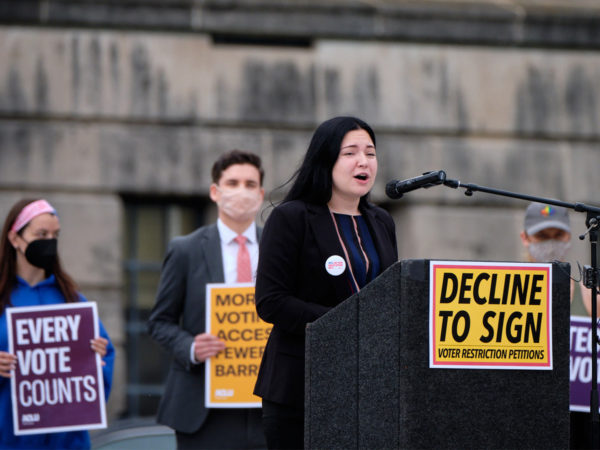 This has also increased my resolve to protect everyone’s right to vote – and therefore, our democracy. We’ve had several battles, a few setbacks, and any number of big and small victories over the years. But I also know that the fight for voting rights is never over. It’s one of persistence and vigilance and consistency. That’s what, and why, I do what I do.

Civic Nebraska will continue to have legal firepower in our ranks, but my background in social psychology lends well to directing our voting rights initiatives. We use so much data in our work: standardizing what we’re collecting in the field, using it to inform our short- and long-term goals, and expanding beyond metrics to gather more qualitative data from voters. This is right up my alley; I have the skills and experience that is vital to informing our work.

Democracy is a cultural and social creature; viewing voting rights through the lens of the social sciences allows us to dig deeper into our advocacy and outreach, go beyond legal issues, and unpack the impacts on our everyday lives within the context of everything else Nebraskans face. My goal is to help build a culture of civic engagement in which we establish voting as a norm with social justice, inclusion, and fair representation as driving values.

Beyond Election Day, Nebraskans will find us fighting for every Nebraskan’s right to vote, especially following felony convictions, and advocating for policies that improve our accessibility to the ballot. You can also expect Civic Nebraska to show up for Nebraskans at the State Capitol, in our broad statewide coalitions, or in our towns, cities, and neighborhoods. That’s exciting to me and to our team.