For one Lincoln father, visiting a Little Free Pantry meant being able to give his kids a small treat — their favorite meal, macaroni and cheese. For a Lincoln woman, it meant knowing she had enough food to reach her next payday. For others, it’s a meal when transportation is limited or unavailable.

But it isn’t the reasons that matter to the Lincolnites who have formed a network of nearly 20 Little Free Pantries across the city. It’s the obvious evidence that unmet needs exist in the community. It’s a need that is persistent and significant, and Little Free Pantries are an essential part in meeting it. 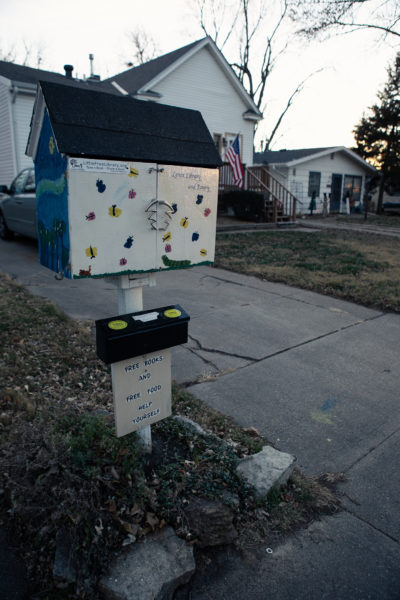 In fact, Pantry hosts expect community demand to continue and likely increase beyond the traditional end-of-year giving season. As winter in Nebraska settles in, new challenges emerge for Lincolnites in getting to traditional food distribution resources. This means more and more hungry people will turn to neighborhood Pantries for a meal.

Combine that with clear evidence that Little Free Pantries have become essential – they are not simply an add-on to other local food sources, but are the primary source for a growing number of Lincolnites – and the urgency to maintain the burgeoning Pantry network becomes clear.

It’s a simple concept, similar to the Little Free Libraries: Build a weather- and animal-resistant structure, put food and other goods inside, and people take what they need. There are no limits on how often the Pantries can be visited and no proof of income is required. The Pantries are available at all hours. And because they are located in front yards and along sidewalks, they are within walking, biking, or drive-up distance for many who need them. 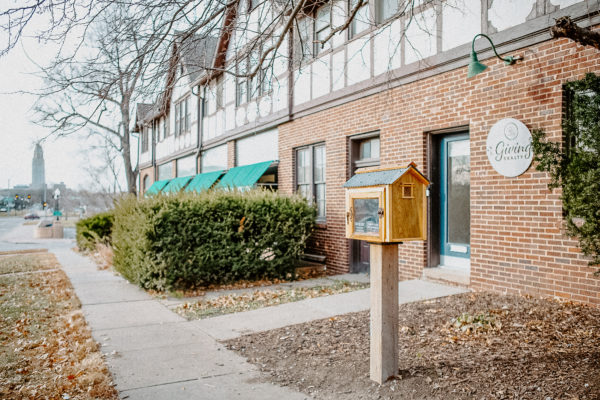 In short, they make it possible for people who may not be able to find other ways to eat.

One thing the pandemic has shown is that traditional means of food distribution don’t or can’t always meet everyone’s needs. Certain programs only distribute during typical work hours, or for short periods of time. With limits on public transportation, it can be difficult for those with limited mobility to safely reach these sites.

“With this pandemic, it’s all about people needing help,” said Michael Reinmiller, a Pantry host who is among the Lincolnites growing the Pantries throughout the city. “And if it’s possible to help folks, it’d be crazy not to.”

Reinmiller and his family erected one of the first Little Free Pantries in Lincoln outside of their home at 1609 S. 26th St. last December. It was a way to provide aid if neighbors were struggling, to get a snack to students walking home who may otherwise have empty cupboards.

When the pandemic hit, Pantry use skyrocketed.

He and his father-in-law have since built and installed 10 more local Pantries, providing more access points in various Lincoln neighborhoods. Each costs about $420 to build with rust- and rot-resistant materials. Reinmiller also created a GoFundMe to cover some of the costs to build and stock the Pantries; his family also has gotten support from their church, holding a stuff-the-truck event and encouraging others to donate to a Pantry near them.

Civic Nebraska has been a conduit and catalyst in connecting Pantry hosts in 2020. This summer, we provided mini-grants to help set up several new Pantries as part of our Youth Civic Leadership program. Civic Nebraska’s Community Learning Centers at Lincoln High School and Lincoln Northeast High School encourage high-school students to not only explore opportunities for civic leadership, but also to connect students, families, neighbors, and community advocates with ideas and resources.

The Little Free Pantries, a neighborhood-based initiative led by residents, are a perfect place to start.

The Pantries themselves are often managed by individuals and families. Connections formed through the CLCs, as well as two Facebook groups specifically for public outreach and Pantry host coordination, helps the network share information and resources, and sustain the Pantries.

“We all just have a desire to help our neighborhood,” said Teresa Thompson, who added a Pantry in September outside her home at 5136 Benton St., near Dawes Middle School. Thompson said she’s enjoyed meeting other Pantry hosts. It’s encouraging to know how much support exists throughout the community, even during unprecedented hardships, she said.

Sue Quambusch, who directs community liaisons and business development for Nebraska Giving Realty, said word of mouth has boosted the Pantry outside the company’s office at 2408 J St. After a news segment this summer about a new Pantry on KOLN/KGIN, both usage and donations increased, with people walking and even driving carloads of deliveries to contribute.

It’s one of the advantages for a business, Quambusch said, that it can accept and store larger food donations and build a constant flow of food to its Pantry.

“There has been such a need that we didn’t expect,” said Miriah Zajic, a broker at Nebraska Giving Realty. Initially, she said, the business thought the Pantry would be frequented by students because many walk by the office to and from Lincoln High. 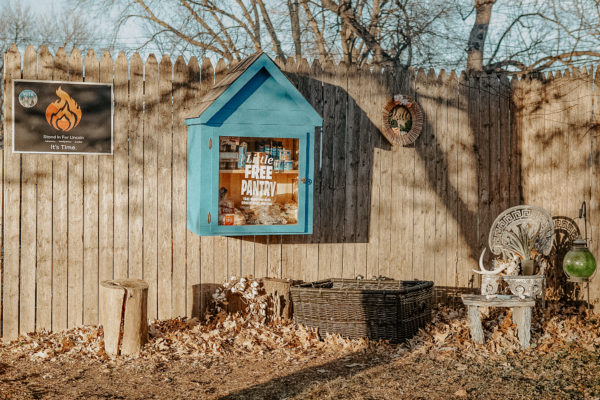 But it’s visited by many families and young professionals, too. One day, a note was left by a neighbor who needed help getting by until their next paycheck, and a promise that they would refill it. Sure enough, a few days later, the Pantry was filled.

That’s something appreciated by Louise, 73, who occasionally visits a Little Free Pantry a short walk from her apartment. She’s on a fixed income, which doesn’t always provide much wiggle room in her budget.

Louise also is concerned about being infected by COVID-19 or spreading the virus to her neighbors, who are also in their 70s or older.

“It’s tough to ask for help,” she said, and it can be discouraging to wait in long lines at a food pantry. But with the Pantries, “it’s an honor system, and that picks you up,” Louise said. “People don’t take what they don’t need.”

Not just at the holidays

While food and monetary donations often increase during the holidays, many hosts reiterated their anticipation of greater need well into the foreseeable future.

The combination of winter, COVID-19, and continued economic stress on families has made the Pantries an essential service.

They encouraged fellow Lincolnites to give what they can.

“I know this winter’s going to be pretty hectic,” Thompson said. “There is always going to be a population that needs help.”

– Story and Photos by Liz McCue

Find a Little Free Pantry near you

Consider adding one more of items you regularly use to your grocery order and adding it to a Little Free Pantry. Regular donations are always welcome and needed.

Donate to the GoFundMe to continue purchasing food and personal care products.

Canned goods may be accepted but are not recommended as temperatures drop (which can cause cans to burst).

Foodnet. See distribution sites, including closings due to COVID-19.

Catholic Social Services. Located at 2241 O St. The St. Francis Food Pantry has pick-up services of pre-packed pantries available from 9 a.m. to noon Mondays through Thursdays. Requests for food are taken starting at 8 a.m. at 402-327-6200. Tuesdays delivery to those over 65 or homebound. More

The Connection Point. Located at 1333 N. 33rd St. Offers pantry and personal care items on Tuesdays and Fridays 2 to 5 p.m. or by appointment. May be accessed weekly. More

People’s City Mission Help Center. Located at 6800 P St. Food baskets are available every other month per family, plus holiday food baskets. Proof of income is required to use the services at the Help Center. More

PrevPrevious‘Why should people care?’: BEHIND ON RENT premieres with call to action
Next2020 was a success. Here’s how our elections can be even better.Next

Thank you everyone me and my daughter would barely be surviving W/O all of your wonderful pantries and sites! We are truly thankful