In 2018, Civic Nebraska has expanded opportunities for Nebraskans to be the change they envision. Take a closer look at the first half of our tenth anniversary year. 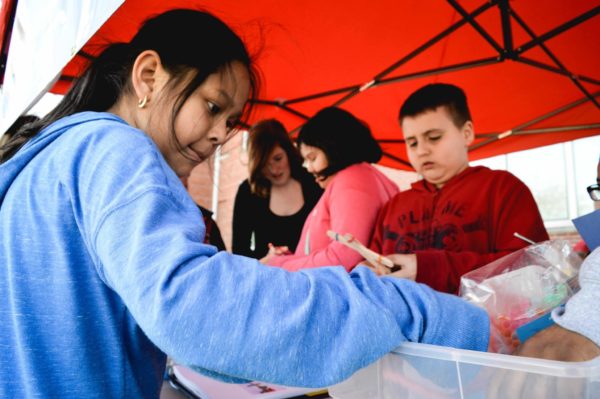 We are recognized. Our programs provide engaging and relevant activities, creating neighborhood connections and inspiring our youth to be the change they envision for their community. In 2018, students have regularly engaged, from organizing a “Prom” for retirees, to beautifying parks and common areas, to engaging with issues identified in our Capitol Experience Day program. 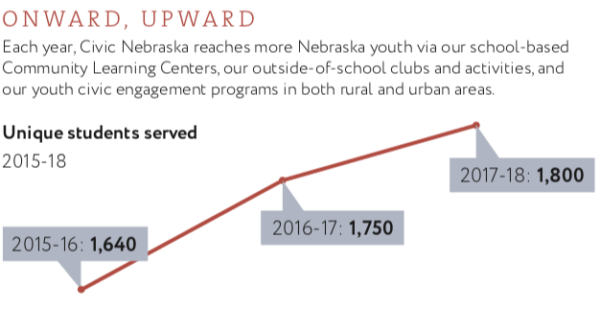 And we are rolling. Our youth-driven projects also forge proficiencies in STEM and career readiness. We’ve added two Think, Make, Create mobile labs, on-the-go makerspaces that feature hands-on “maker” activities for children of all ages. Along with Big Red Keno and Beyond School Bells, we are reaching beyond school neighborhoods to enrich the lives of hundreds of children. In the first months of the initiative, nearly 200 students at our Community Learning Centers used the labs, as well as over 150 children at other events.

A more modern and robust democracy for all Nebraskans means engaged and informed citizens who take action in meaningful ways. Civic Nebraska strengthens our state’s civic fabric through civic leadership programming and

facilitation for communities and citizens.

We are expanding. By extending into rural Nebraska, our civic health programs have helped towns, cities, and neighborhoods map unique assets, identify local issues, and prioritize how to address them. Our civil discourse trainings also are sought after to cut through partisan rhetoric.

We are innovating. Our Capitol Experience Days are so successful in immersing students in state government – in 2018, nearly 300 students from over 20 schools took part – we have adapted them to serve others. In June, New Americans Capitol Experience Day gave immigrants, refugees, and new citizens an in-depth look at Nebraska government. And on Dec. 15, we will host Civic Saturday, a public celebration of self-government.

And we are partnering. With every connection we make, we earn trust as an open and accessible civic partner. From schools to municipal organizations, from economic development groups to businesses, we are working with communities on the move.

We are leading. ONE Omaha’s Leadership Series, for leaders from neighborhoods, businesses, and community organizations, provides knowledge, skills, and connections that can be leveraged to advocate for a stronger community, had 56 Omahans participate in the first half of 2018.

And we are connecting. Collective Impact Lincoln and ONE Omaha both build ground-up networks and ensure that diverse community members are engaged in public decision-making, so that public policy and practice reflects everyone’s needs

A more modern and robust democracy for all Nebraskans means a year-round culture of engagement that creates lifelong voters. Ballot access is essential to this philosophy. Civic Nebraska ensures our elections are modern, fair, and accessible.

We are achieving. We defeated voter ID legislation in the Legislature for the eighth straight year. We also stopped harmful bills on redistricting and a constitutional convention, and passed an important extension to the online voter registration deadline.

We are preparing. In 2019, we will fight to improve the efficiency and security of our registration process, to expand voting by mail, and to restore the right to vote for those with a previous felony conviction.

And we are protecting. We trained and organized 35 nonpartisan election observers for Nebraska’s primary election and answered questions via our Election Day Hotline. In May, staff tracked dozens of concerns and assisted voters when necessary. A number of reports detailed incorrectly issued ballots. 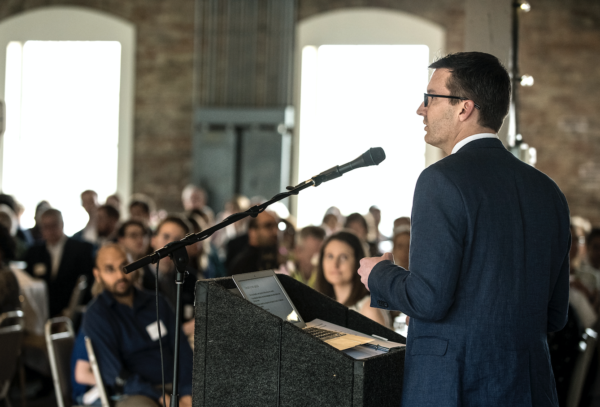 Ten years ago, on the tenth floor of Harper Hall at the University of Nebraska, a group of students committed to improve civic education and access to elections. They called themselves Nebraskans for Civic Reform.

Today we are Civic Nebraska, and we have soared higher than anyone predicted. And while we continue to carry out our original mission, we have put our innovative spirit and belief in the power of new ideas to work.

Our founders knew that our task would be a long undertaking, and that Civic Nebraska would ultimately be measured by whether it endures as a hub for lasting statewide commitment to democracy.

There is much work still to be done. With your support, we will continue to carry out our essential charge.