Voting during a pandemic

Director of Public Policy Westin Miller on how voting by mail can help ensure a smooth election in this stressful and uncertain year.

The uncertainty of COVID-19 affects every part of our personal lives, and it’s starting to affect some of the most important moments in our national and civic lives –elections.

Several states are postponing primary elections, and a busy polling place is exactly the kind of place the Centers for Disease Control says you should avoid right now. But we can’t not have elections. So now what? There are concrete steps that individuals, counties, and the state can all take to ensure smooth elections in this stressful and uncertain year.

Vote by mail! Any Nebraska voter can request a mail-in ballot for any reason. Go to https://www.civicnebraska.vote and we’ll walk you through the process.

If you live in a county with fewer than 10,000 people, your county can apply to the Secretary of State to conduct all of your elections with a vote-by-mail standard. Not just because of coronavirus – this can be your standard all of the time. If this sounds good to you, call your election official and encourage them to consider this option.

If you live in a county with more than 10,000 people, the all-mail option is not available to you. But you can join the growing list of counties mailing vote-by-mail request forms to every registered voter this year. Many counties allow you to check a box asking for your vote-by-mail request form to be automatically sent to you each election, called a Permanent Absentee Voter List.

The Nebraska Legislature has an opportunity to remove many of the unnecessary bureaucratic barriers preventing counties from emergency planning and fully utilizing vote-by-mail. The Legislature needs to act soon to remove the arbitrary population cap preventing counties larger than 10,000 people from even discussing a vote-by-mail election standard.

The Legislature is currently making another important fix to our vote-by-mail policy. LB1055 would guarantee at least one in-person option for ballot return and at least one secure drop box in every county conducting a vote-by-mail election. This gives voters the choice to return their ballot by mail, in a secure dropbox, or in person at the county clerk’s office. LB1055 advanced unanimously through its first vote but needs to be voted on again two more times and signed into law by Gov. Pete Ricketts.

Voting by mail is the only way to avoid unexpected circumstances or unintended consequences on election day. Voting by mail is secure, it’s reliable, and it’s in the interest of public safety. Avoid the germs, avoid the lines, avoid any technical difficulties. Vote early to make sure your voice is heard.

FAQs about voting by mail

How do you prevent voter fraud?

Voting by mail makes it easy to vote and hard to cheat. If someone duplicated a ballot and attempted to vote twice, the EMS would accept the first returned ballot but flag an error when the second ballot was received. If someone intercepted another voter’s ballot, they would have to steam it open, fill it out, re-seal it, successfully forge a signature, return it, all the while hoping that the intended recipient doesn’t notice it’s an election year and they never got a ballot.

How do you make sure a ballot isn’t mailed to the wrong person?

Vote-by-mail ballots are clearly addressed to a specific individual, and opening someone else’s ballot is already a felony. County officials and the state take multiple steps to ensure ballots are mailed to the correct addresses. Nebraska currently checks against the National Change of Address files and the Interstate Voter Registration Crosscheck Program. We also check against death records and run a check against the Department of Moter Vehicles database.

If despite all that a ballot is still mailed to the wrong address, the ballot will be returned to the county (ballots are not forwardable mail). The county can then try to contact the voter over the phone, and send a confirmation card.

A vote-by-mail standard improves the accuracy of the voter registration database. Because a ballot is sent to every registered voter, it will either be delivered without issue or it will be returned to the county election official, who can then take steps to confirm the voter’s registered address. This system has already helped several Nebraska counties achieve the most accurate voter rolls they’ve ever had.

Does vote-by-mail help one party over another?

A vote-by-mail standard helps whoever votes by mail. Nationwide, the early ballot request advantage varies by states – in some states, it’s Republicans with an advantage, in others it’s Democrats. In Nebraska, we’ve seen no evidence that vote-by-mail would affect one party over another.

The two before/after datasets we have are from Garden and Dawes counties. In Garden County, the 2016 election went 81.8 percent for Republicans, and in 2018 after the switch, it was an almost-identical 81.7 percent Republican. In Dawes County, Republicans saw about a 2 percent dip, but Republican candidates still won by a 41 percent margin.

We have found no evidence anywhere in the United States of election results being changed by converting to a vote-by-mail standard. It simply increases the number of people who vote.

Westin Miller is director of public policy at Civic Nebraska.

PrevPreviousThe right to vote: A never-ending struggle for equality, justice and representation
NextIn extraordinary times, our values are our guideNext

‘A Transfer of Power,’ a civic sermon

To strengthen our democracy, we must claim our American powers of fact, of faith, and of speaking up and standing out.

The right of Nebraskans to elect state and county officials must be jealously protected. No amount of time spent in error alleviates the urgency with which we must bring these statutes into alignment with the plain language of the state Constitution and restore voters’ rights to elect the people who run their elections. 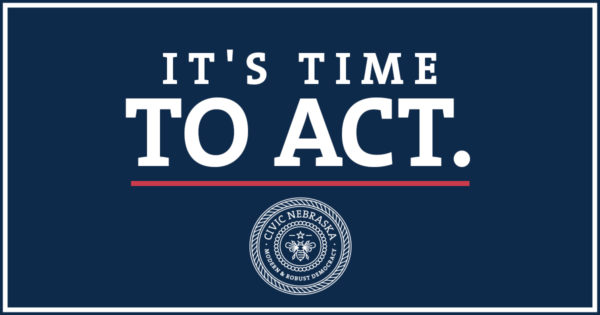 3 things you can do TODAY to protect voting rights

The time is now to stand up and speak out against the forces of untruth and myths of voter fraud, which have waged war on our democracy.