As the election approaches, be wary of the idea that it's somehow a cop-out if you vote early from home. Hold fast to your right to vote however you want.

During this world-bending pandemic, Nebraskans have taken historic advantage of our state’s no-excuse early mail-in voting option to cast their ballots from home and in advance. Participation in our elections has climbed to record-breaking levels this year. It’s a sight we’re glad to see; more people voting is good for democracy, and Civic Nebraska is proud to help Nebraskans connect with the best and safest ways for them to cast their ballots during this ongoing public health crisis.

Unfortunately, in the months since Nebraska’s massively successful mail-in primary, we’ve also witnessed a wider attempt to degrade and devalue the practice of voting by mail. We’ve already written about how reckless and damaging such rhetoric can be, so we won’t belabor that point. But we do want to address one of the side effects of this push. In particular, a certain brand of drive-by comment, mainly on social media.

(2) Voting in person on Election Day is the only “real” way to vote.

Let’s look at those, shall we?

1.  Voting in person isn’t like shopping for Ol’ Roy.

Just because a polling place and a big-box retailer are both places other than your house does not make them the exact same thing. Walmart (or Menards, or Costco, or whatever giant store is used for this argument) can implement social distancing far more effectively than your typical polling place. An average Walmart sprawls out to 180,000 square feet. It has no permanent lines like polling places do. And it offers self-checkout if you want to practice further distancing and minimize contact.

Polling places are set up in places like schools, churches, courthouses, American Legion halls, fire halls, community centers, and retirement homes. These are venues designed for other purposes and are intended to hold more than a few people, to be sure. But they’re not built to comfortably hold big, big groups of people like a giant retailer can. You have to engage with workers there to get and submit your ballot. The likelihood of masses of voters being forced to congregate in these smaller, closer quarters – and at some notable polling spots, for much longer periods of time – is much greater than your typical in-and-out surgical strike at Walmart.

Last, Walmart doesn’t require you to visit it only from 8 am to 8 pm on the first Tuesday of November, or else. You can always go shopping another time if it’s too busy. Given what we know about viral load and other ways the virus tends to spread, voting from home has predictably become a very attractive alternative for many Nebraskans.

The other part of this notion is mostly political. It piggybacks the claim that vote-by-mail has suddenly become unreliable or particularly vulnerable to fraud. Again, we’ve spent a fair amount of time explaining that this rhetoric is mainly attempting to erode your faith in our elections, as well as to downplay the very real risks of exposure to coronavirus. But above all, it implies that the “real” way to vote is in person and that vote-by-mail is a special, derivative method (and therefore not as secure or efficient as in-person voting). 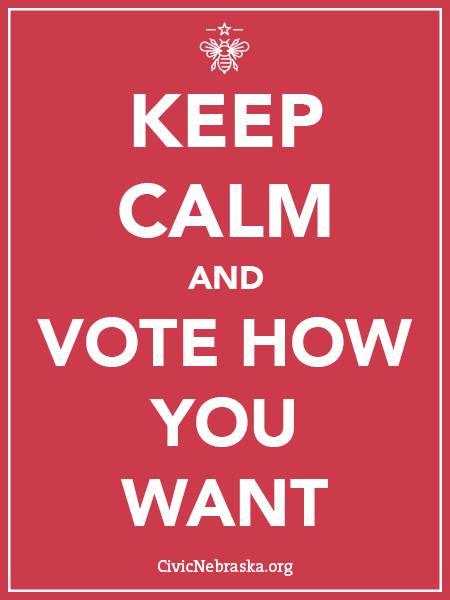 Remember this: A vote is a vote, whether it’s cast early in person at the election office, sent back early through the mail, dropped off in advance at the county dropbox, or cast in person on Election Day. And remember this: It’s been this way for years and years in Nebraska. There are strict guardrails to prevent fraud and error. Our election officials know how to do this, and do this well.

Let’s also be clear: If you’re determined to vote in person on Election Day, that’s great! It’s absolutely your right to do so. Everyone will be counting on you to keep yourself and your fellow in-person, day-of voters safe by following all of your polling site’s health guidelines. Based on our experience with the spring primary, in-person voting in Nebraska was generally safe; big reasons included the vigilance of poll workers and extra safety guidelines from the Secretary of State (before-and-after sanitization stations, face-covering requirements, distanced voting booths, voters receiving their own pens with which to vote).

But above all, Primary Election Day went well because only about 20 percent of participants voted in person. A whopping eight in 10 had already cast their ballots by mail, ahead of time. That made it easier to mitigate against the virus at the in-person sites on Primary Election Day.

So, as the general election approaches, be wary of the idea that it’s a cop-out if you vote early from home. It’s legal, it’s legit, and it’s the safest option in a pandemic. Our advice is to carry on – and to hold fast to your right to vote however you want to.

PrevPreviousIn our new normal, a new definition of ‘self-control’
NextCensus: Where do we stand? What’s next?Next