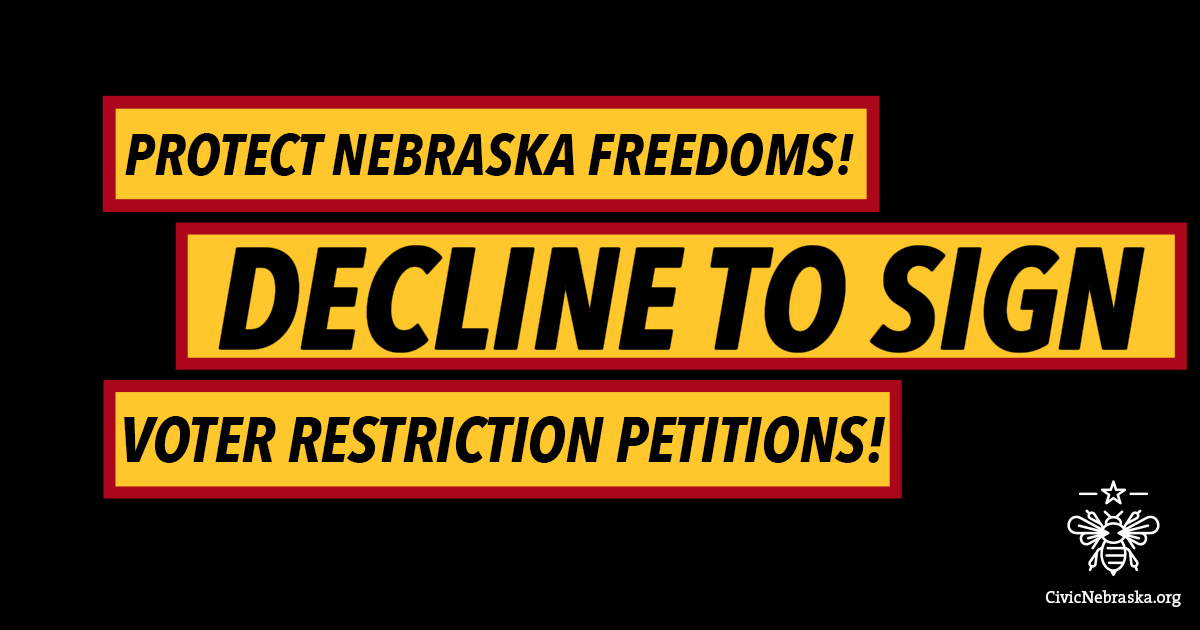 We must not casually sign away our rights in the futile hope that we might feel a little bit better, while actually doing nothing to improve our elections.

Earlier this week, the language of a proposed revision to the Nebraska Constitution to place new restrictions on our state’s voters was published. Every Nebraskan who cherishes our state’s motto of Equality Before the Law should be seriously troubled with this language. We encourage our fellow Nebraskans to consider the real-world costs, complications, and consequences in the details of this proposed measure – and to decline to sign any petition in support of it.

Next, the amendment would needlessly complicate and discourage voting. Eligible Nebraska voters would endure longer waits to cast their ballots, encounter repetitive hurdles when absentee voting, and face the very real possibility of being turned away from their polling places. These processes neither improve nor protect our elections.

As written, the proposed amendment is a vague directive that creates far more questions than it answers. For example, what kind of identification qualifies? We know that time-honored identification such as Social Security cards and birth certificates would become useless if the amendment comes to pass. Will military, tribal, or student IDs count? And how will absentee voters, especially overseas military voters, overcome the burden of these additional requirements? The politicians behind this initiative are asking Nebraskans to vote without answers to these, and an untold number of other, questions.

When our fundamental constitutional rights are concerned, all means all. This includes senior citizens, disabled Nebraskans, Black and brown voters, those with limited incomes, young people, or anyone who experiences difficulty getting and keeping the type of identification this amendment would demand.

The state’s continued encroachment on Nebraskans’ fundamental rights can easily become a means of discrimination. Such restrictive measures harm real, flesh-and-bone people – our neighbors, friends, co-workers, loved ones, even ourselves. The politicians behind this initiative are asking you to willfully deny Nebraskans the ability and opportunity to participate equally in democracy.

A modern and robust democracy requires more eligible voters participating in our elections, not fewer. We must not casually sign away our rights in the futile hope that we might feel a little bit better, while actually doing nothing to improve our elections. At the end of the day, this deprives us all of freedom.

Get involved | Donate to Civic Nebraska