Heather Engdahl assumed the role of Director of Voting Rights Initiatives at Civic Nebraska on Aug. 15.

We’re pleased to announce that Heather Engdahl, who has guided field organizing at Civic Nebraska for the last three years, has been promoted to a new role in our organization – director of voting rights. Heather now oversees all of Civic Nebraska’s efforts on behalf of voters across the state, including our get-out-the-vote and election observation and protection initiatives. She began her new job on Aug. 15. We sat down with Heather recently to get her thoughts on the state of voting rights in Nebraska as we approach the midterms and why she believes Civic Nebraska’s Voting Rights Initiatives work is so important right now.

CIVIC NEBRASKA: First, congratulations on the promotion. You’ve been with Civic Nebraska since 2019, coordinating the Nebraska Counts coalition in 2020 and then serving as voting rights field manager, so you’re no stranger to our work to protect Nebraskans’ access to the ballot. What would you say that work has done to prepare you for this role?

HEATHER ENGDAHL: Thank you! My work has prepared me for this role by building a foundation of organizing and engaging with voters across the state. I’ve gained skills in building relationships with partners and managing coalitions, but also with Nebraska voters and residents. I’ve also deepened my resolve to protect our right to vote and our democracy as a whole by having witnessed a variety of battles and victories over the years. I like to think that I bring those considerations from the field, discernment of how we can approach voting rights issues, and the administrative knowledge and competencies that are all important in this role. 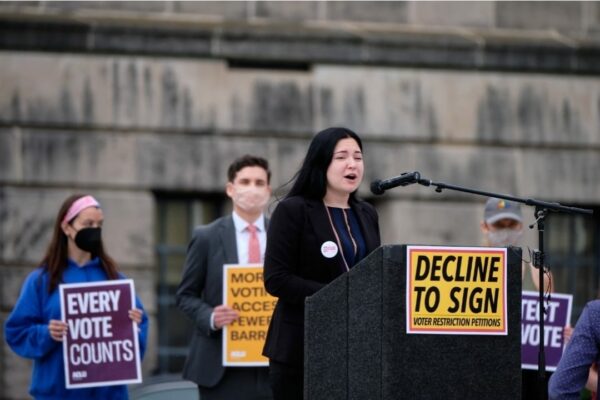 CN: You’re stepping into this role at an exciting time, with the midterm elections just around the corner and many voting rights-related issues percolating at the statehouse. What are your immediate priorities for the Voting Rights Initiatives team in this election year? What are the challenges?

HE: One major immediate priority is the November election, obviously. Our team will be getting out the vote, working to increase voter turnout and to train volunteers for nonpartisan poll observation. Both of these initiatives will remain key activities for the voting rights team.

Additionally, we are resisting the latest attempt to enact the age-old voter suppression tactic of voter ID in Nebraska. This ballot initiative would require the state legislature to implement a strict photo ID requirement for all voters and all elections, which would result in at least 54,000 Nebraskan voters losing their right to vote. This is a challenge for us because many Nebraskans are under the false impression that either everyone has an ID, that IDs are easy to obtain, or that this type of policy is even remotely necessary. It’s an uphill battle to deeply connect with voters and disrupt the problematic narratives around voter ID.

And of course, we are prioritizing our voting rights advocacy program and partners as we approach the next legislative session. We can expect many issues to come up at the Legislature and incoming senators with various positions on voting rights, but I hope we can all agree that the right to vote must be protected.

CN: Can you say a little more about what Civic Nebraska is doing to educate Nebraska voters about the current voter ID ballot initiative? What are the main things you want Nebraskans to understand about this attempt at restricting the vote?

HE: Civic Nebraska is leading the ballot committee and coalition which aims to defeat voter ID. We’re conducting direct voter outreach like calls, door canvassing, and event-based engagement, along with strong messaging and communications efforts. One education piece that I’m excited about will include sharing stories of impact so that we can hear directly from individual voters that would be affected by a voter ID policy.

Some main things that I want Nebraskans to know would be this: We don’t have any voter impersonation issues, which is what a photo ID policy is designed to address. We verify our identity with voter registration, so there is already an identity confirmation step for voters. Again, not everyone has an ID and it’s not easy to get an ID. Changing the state Constitution to include this policy would cost millions of tax dollars, yet it is unnecessary and there is nothing to gain from that investment. There are many other things to invest in that would improve life in Nebraska and not restrict access to voting or disenfranchise otherwise eligible voters.

CN: On that note, it seems that things that used to enjoy bipartisan support have become hyperpartisan flashpoints in our current political environment. Vote by mail, which has been a reliably “purple” topic until very recently, is an obvious example. How do you see the best way to reinforce that our elections, and specifically vote-by-mail ballots, are safe and secure?

HE: This is very true. The best way to reinforce that our elections are secure is to, again, disrupt the narrative that they’re lacking security or integrity. If we can punch through that noise and engage in meaningful conversations based on facts, then we have the opportunity to change the narrative and at least plant the seeds for voters to reconsider the empty notion of “election fraud.”

It’s also really important to know that it’s not a one-size-fits-all situation. Many people have various concerns about this issue and we must listen first to be able to thoroughly address those concerns. Our Safe, Secure, Certified initiative directly challenges these disinformation campaigns and is well informed by facts from election officials and concerns from voters. We identified the need for clear and consistent messaging to combat the disinformation, and we are providing information about the nationally recognized integrity in our election systems and processes.

CN: Next to the executive director, this is arguably the most publicly visible role at Civic Nebraska. What concerns are you hearing from Nebraskans about the state of voting rights in our state?

HE: I’m hearing many concerns about groups pushing conspiracy theories about election problems. There are groups presenting information that appears credible, but upon the slightest bit of scrutiny, loses all credibility. This is very concerning to Nebraskans, me included. At the same time, the attack on our access to voting is beyond concerning to many of our fellow Nebraskans. This includes, of course, this latest push for voter ID, but also efforts to make voting by mail more complicated and to limit early in-person voting. We must take every opportunity to make voting more accessible instead of restricting voting access.

CN: What can Nebraskans expect from Civic Nebraska from now until Election Day – and beyond?

HE: Nebraskans can expect calls, texts, and knocks on their door from our GOTV canvassing team engaging in conversation about making a voting plan and being ready to vote in the November 8th General Election. Nebraskans can also expect targeted engagement about voting ‘No to voter ID’ along with information about the safe and secure nature of our election systems. Beyond Election Day, Nebraskans can expect us to continue fighting for every Nebraskan’s right to vote, especially following felony convictions, and advocating for policies that improve our accessibility to the ballot box. You can also expect Civic Nebraska to show up for Nebraskan communities whether it’s at the Capitol, in coalitions, or in the neighborhoods. We’re continually co-learning and gaining critical skills to ensure our work and impact are community-centered.

CN: Unlike your predecessor, who held a law degree, you’re a social psychologist by training. How is your background in the social sciences a benefit to your new role?

HE: There’s obviously a lot of value in a law degree, and Civic Nebraska will continue to have legal firepower in our ranks. But my background in social psychology lends really well to this job. One technical aspect is the use of data in our work: standardizing the data we’re collecting in the field, utilizing the data to inform the goals we’re setting for the team, and expanding beyond numeric metrics to gather more qualitative data. With my extensive experience with research studies, I have a skill set for data analysis and management that greatly supports our work. Viewing such an important issue as voting rights through the lens of the social sciences has allowed me to dig deeper into our advocacy and outreach, go beyond legal issues, and unpack the impacts on our everyday lives within the context of everything else Nebraskans face. I think of building a culture of civic engagement in which we establish voting as a norm with social justice, inclusion, and fair representation as driving values.

CN: Well, we know you’re going to be a great director of voting rights at Civic Nebraska. One last question before we go: It’s almost football season. You’re a big pigskin fan. Who ya got in the Super Bowl this year?

HE: Oh, great question! I have to go with the Buffalo Bills. They’re not one of my favorite teams, but that roster is stacked this year. Plus, I caught their preseason game against the Colts on Saturday, and I enjoyed watching them – so if that’s any indication of the season, I think they’ll have a great one. Then, out of respect and love for one of my teams, I’d love to see the Cowboys make it from the NFC, and then win the Lombardi Trophy!