Nebraska’s civic life: How do we stack up? What’s next?

Introducing the 2020 Nebraska Civic Health Index, a comprehensive report on key indicators of our state’s civic life – which includes recommendations on how to strengthen Nebraska's civic health.

Nebraskans are national leaders in spending time with neighbors, family, and friends, volunteering, and working to achieve positive local results. But we can improve in spending time with those of different backgrounds, voting, and constructively discussing politics to address mutual problems.

Those were the key findings of the 2020 Nebraska Civic Health Index, a comprehensive report on key indicators of our state’s civic life. Produced every five years by Civic Nebraska, the National Conference on Citizenship, and the University of Nebraska Public Policy Center, the Index shares a road map on how to create stronger civic health in Nebraska – among them civic education, media literacy, and fewer barriers to civic participation. 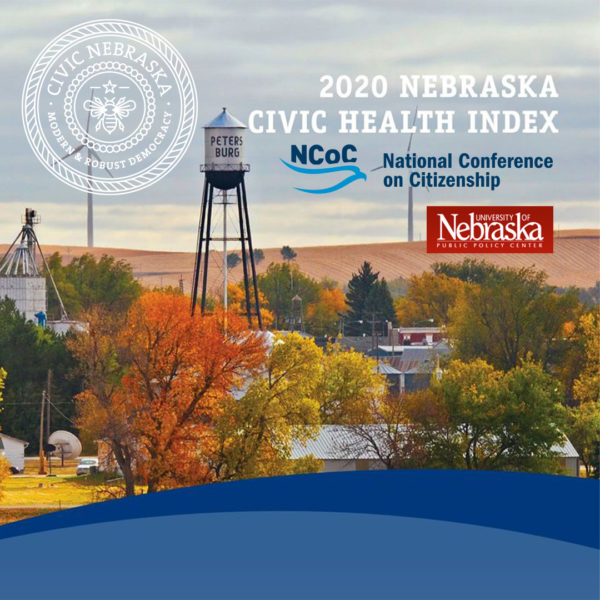 Civic health reflects the degree to which individuals participate and are represented in their communities, from local and state governance to interactions with friends or family. Civic health also refers to the way that communities are organized to define and address public problems, said Amanda Barker, Civic Nebraska’s deputy executive director.

“Nebraskans have a lot to be proud of regarding the strength and shape of our civic life,” Barker, who also leads Civic Nebraska’s Civic Health Programs across the state, said. “The challenge now is to raise the state’s civic health for all Nebraskans.”

Nebraska outpaced many states in social connectedness, scoring Top 10 ranks in areas such as spending frequent time with family, friends, and neighbors. It also ranked No. 6 nationally (40.2 percent) in volunteerism and working with neighbors to achieve positive local results (29.5 percent), which fall under the “community engagement” indicator.

However, Nebraskans’ confidence in institutions lagged. While the state’s residents said they are generally confident in local institutions, that did not entirely translate to federal and state institutions. Fewer than 30 percent of rural Nebraskans, for example, said they had high confidence in the federal government; 31 percent said the same about the Nebraska Legislature.

Nebraskans’ political involvement also showed a mixed picture. The state ranked No. 7 nationally (62 percent) in participation in local elections, but fares lower in other areas, such as voting in recent elections prior to 2020 (50.2 percent, or No. 37 nationally). Nebraskans also were in the lower half of states in discussing politics with neighbors (No. 27), and closely following the news (No. 38). The Nebraska Civic Health Index also includes a unique analysis of competitive races across the state since 2000.

Civic Nebraska and its partners consider the Index a starting point for conversation and collective action to strengthen civic life and democratic involvement across the entire state, Barker said. For small towns and big cities alike, the benefits of strong civic health include achieving success on community priorities, increased wellness, and greater economic prosperity.

The Index also offered several recommendations across the four indicator areas, including:

> Strengthen bridging connections. Support the infrastructure of connection – the groups, associations, even built environment – within communities that support trusting relationships with special attention to building ties that connect people of diverse backgrounds.

> Innovative engagement opportunities. Adapt engagement to support residents to be involved regardless of work schedule, income, neighborhood, or other household characteristics. Lift up both formal and informal engagement and leadership through a focus on assets. Find ways to securely and effectively make participation more accessible for historically underrepresented populations to ensure a truly representative democracy.

> Comprehensive civic education. This includes in- and out-of-school learning about state and local government, the law, the Constitution, and international institutions. Experiential learning also is important for students to practice civic virtues and principles and use their strengths and voice to contribute to civic life. 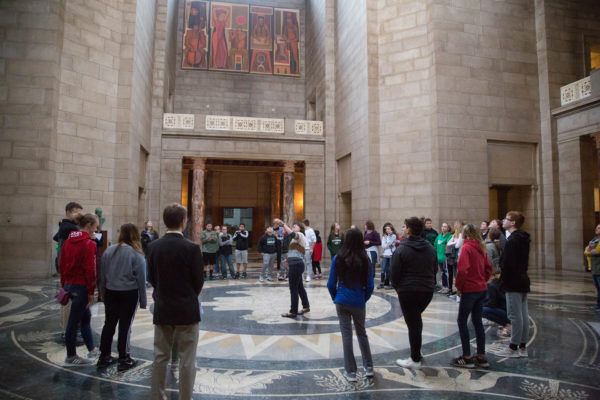 > Discourse and media literacy. Fact-finding and media literacy are important to interpret current events. Nebraskans of all ages also can build constructive discourse skills, which includes being confident to make and defend sound judgments about issues and ideas.

Read the full 2020 Nebraska Civic Health Index and its recommendations. The Index includes a free civic health and assessment guide for communities.

A free virtual discussion of the 2020 Index is scheduled for 11 am CST on Feb. 4. Register for the Zoom event here.

While the 2020 Index focused on statewide responses, Barker said most activities that build community and strong civic health start locally, among friends and neighbors. Such activities can be supported statewide through peer learning and by aligning resources from local and state organizations.

“All of these actions will help build communities where Nebraskans of all ages and backgrounds take action in civic life in innovative and meaningful ways,” Barker said.