A new report on the 2020 election reinforces what we've been saying all along: If Americans are given the opportunity to vote easily, safely, and securely from home, they'll do it.

With all of the news around the globe in the past week, you may not have noticed an important report that was made public. The 2020 Election Administration and Voting Survey, or EAVS, is a comprehensive data set submitted to Congress that breaks down national and state-level voting trends.

Not who or what people vote for, mind you – but how they vote. There’s a lot of great information in the full report, and we’d welcome you to dive in at your leisure. But if you’re looking for top-line takeaways, here are a few:

›› The pandemic was (obviously) a big factor in how people participated in the 2020 election. Americans largely shifted from in-person voting to casting early mail-in ballots. The changes between 2016 and 2020 in this area were staggering: Five years ago, almost 55 percent of voters cast their ballots on Election Day. In 2020, in-person voters fell to just 31 percent of the electorate. Voters across the United States quickly and easily pivoted to early mail-in ballots as their method of choice; some 43 percent of the electorate voted from home, up nearly 20 percentage points from four years earlier.

›› The result was a record national turnout. Some 161 million Americans – 68 percent of all registered U.S. voters – cast ballots in the 2020 general election. That’s amazing!

›› Nebraska set records, too. This happened because of two reasons: We’re a “no excuse” state for mail-in voting, meaning any registered voter can request an early mail-in ballot for any reason; and because state and local officials made early mail-in ballot requests easy to get by sending a request form to every registered voter in the state. Not surprisingly, Nebraska absolutely crushed its previous participation record for a general election. Three in every four registered voters in our state cast a ballot in ’20. 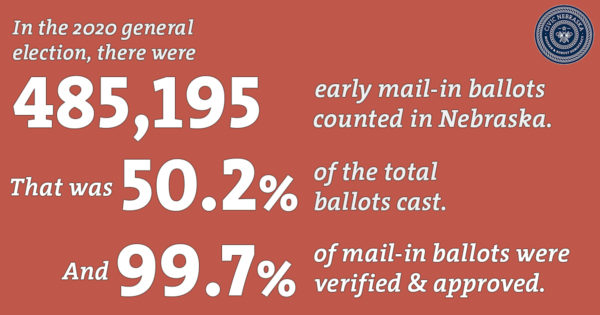 ›› When people have reliable access to voting by mail, they’ll vote in larger numbers. In 2020, Nebraskans cast 486,844 mail-in ballots; of those, just 0.3 percent – 1,649 – were not accepted. Civic Nebraska worked with state and local election officials to help mail-in voters correct ballots by the Election Day deadline. Nebraska finished among the most successful states in administering vote-by-mail operations.

›› More people participating in our elections is good for democracy. Higher turnout means Nebraskans’ collective ideas and ideals are more fully and accurately reflected in our elected leaders, our policies, and our statewide priorities. That’s why we work hard every election to turn out the vote – Republicans, Democrats, nonpartisans, whoever– and it’s why we fight to stop efforts to add new barriers to the ballot in Nebraska.

›› Our elections are safe, secure, and efficient. Let’s not break them. Currently, a group of politicians is seeking to add a new set of restrictions on voting, including voting by mail. Those who apparently oppose consistently high voter turnout want Nebraskans to sign a petition to revise the state Constitution, which would unnecessarily complicate the early mail-in voting process that worked so well in 2020. We encourage you to decline to sign these petitions if asked.