7 reasons to register to vote

The reasons to register to vote are plentiful. Here are seven big ones from your friends at Civic Nebraska. 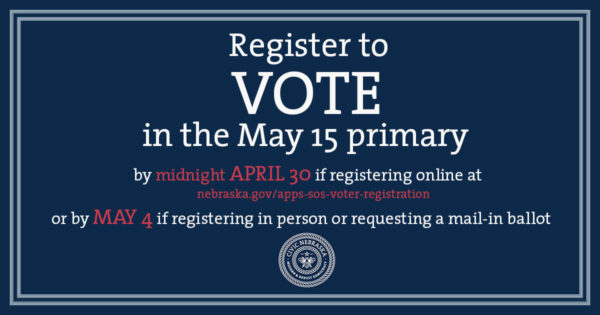 It’s April 30, which means you have until 11:59:59 p.m. tonight to register online for Nebraska’s May 15 primary election. If you wish to do it in person, you have until May 4 to register at your area DMV or the office of your county clerk/election commissioner.

The compelling reasons to register to vote are plentiful. But here are seven big ones from your friends at Civic Nebraska.

Like, really easy. Registering to vote online in Nebraska only takes a few minutes –  the equivalent of approximately 2.5 cute cat videos. Online registration is available through midnight tonight (April 30) by following this link.

2. Democracies are cool — but only when citizens act.

Did you know that the United States is one of just a handful of democracies that puts the responsibility of registering to vote on its citizens? That’s one reason why the United States tends to be behind places like, say, Belgium, South Korea, Israel, Mexico, Canada, and Australia in voter turnout. To live up to our belief that we’re the greatest country in the world, we need to participate in its decision-making.

3. Politicians and elected officials will know who you are.

If you don’t register to vote, you’re basically handing your personal power over what matters most to you to someone else. It’s good to be trusting and open to other people’s ideas, but that might be taking it too far.

5. Your kids will thank you.

Until they reach the age of 18, youth count on us to represent them. When you register to vote, you’re making a promise to the children in your community, state, and country that you care about their future.

6. It’s the most American thing you’ll do all day.

Voting is one of our most important rights. Still, there are plenty of people out there who would rather that you find anything else to do on Election Day except vote. But there is power in numbers — and voting is one of the most deeply held American traditions we have. Don’t squander it.

7. YOU CAN’T VOTE IF YOU’RE NOT REGISTERED.

It’s that simple. All elections are consequential, but the 2018 election in particular is shaping up to be a doozy in that department. The May 15 primary is the first round of a notable election year. You will want to be a part of it.

If you haven’t yet, register online to vote TODAY.